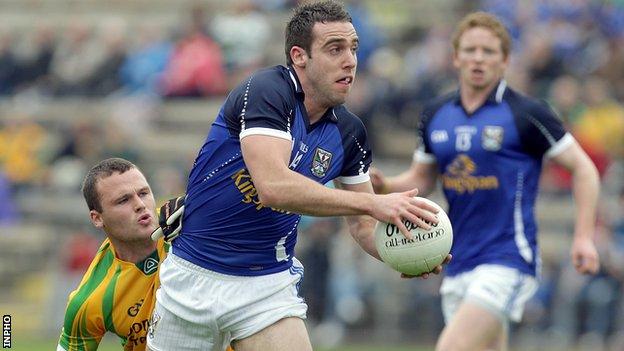 Sligo gained control with a Shane McManus goal but Cavan fired over the last four points of the first half to trail 1-5 to 0-6 at the break.

Sligo's Adrian McIntryre was sent-off as Cavan scored the final five points down to earn a draw.

Cavan endured scoreless 20-minute spells in each half but still came out with a draw which leaves them in third place and just a point behind leaders Monaghan.

Sligo built up a commanding lead after Gilmartin's goal but McIntyre's dismissal, for two yellow cards, assisted Cavan in their stunning finish to the game.

The Ulster visitors were five behind with four minutes left but the impressive Barry Reilly, a second-half substitute along with Keating, sent over two points and then set up the goal late in injury-time.

His high ball was palmed into the net by Keating to the delight of the Cavan fans.

"We knew it was going to be tough and the boys battled and pressed forward to the very end," said Hylands.

"It's a bit early to talk about promotion but we have a good opportunity to push for it."