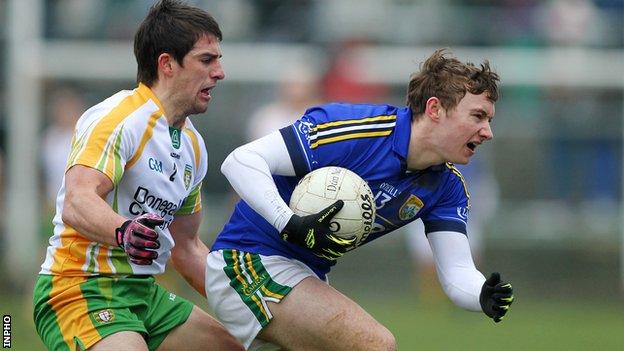 Skipper Michael Murphy netted a first-half penalty and finished the game with a personal tally of 1-5 and the Ulster county never looked in danger.

Out-of-sorts Kerry did not score until the 18th minute by which stage Donegal had chalked up a goal and three points.

The Kerry cause was setback further by the dismissal of Tomás Ó Sé.

The five-times All Star received a red card after an off-the-ball incident in the fifth minute of the second half.

"I am happy enough with the performance," said Donegal manager Jim McGuinness.

"We experimented a wee bit, so to also get the result was a big bonus for us.

"It was important to push on. We have been improving a small bit in every game but there is a lot still to come from us.

"We use the league to unearth a few new faces for the Championship squad. If you can do that and get enough points to stay in the division, that's good."

Donegal had a great start with Leo McLoone pointing in the fourth minute, quickly followed by Murphy's penalty which was awarded for a foul on Ross Wherity.

Johnny Buckley and Ó Sé got Kerry up and running, but they managed only one more point before the break with Eoin Brosnan on target.

Murphy kicked another point from an acute angle and Ryan Bradley got the last point of the half for a 1-5 to 0-3 lead.

Murphy, McLoone, Neill Gallagher and Rory Kavanagh scored unanswered points for Donegal and Kerry, down to 14 men, were in deep trouble.

The dismissal of veteran defender Ó Sé came after a linesman brought referee Derek Fahy 's attention to something which happened off the ball.