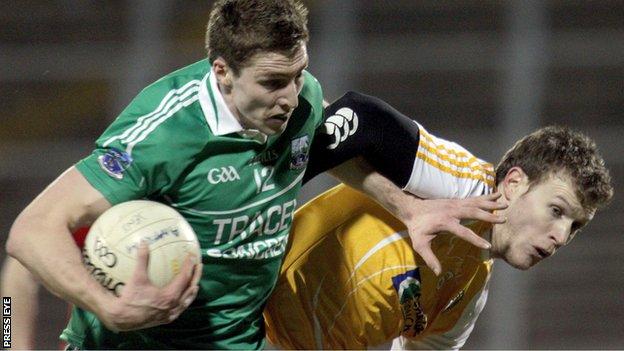 The Erne County have been ravaged by injuries over the last two weeks with Sean Quigley breaking a leg and James Sherry sustaining a broken hand.

Donnelly will now join the duo in missing the remainder of the league.

The half-forward suffered the injury when Monaghan's Darren Hughes made a sliding challenge in Saturday's game.

Hughes avoided any caution for the tackle and Fermanagh protests only led to one of the Erne County players being booked for his complaints.

"First off, we had Ronan Gallagher dislocating a shoulder in late December and then the injuries to James Sherry and Sean Quigley and now this broken fibula for Eoin," added Treacy.

"The injuries are stacking up and really starting to impact on us. Not having Sean Quigley at the weekend really affected us because we didn't have his free-taking ability.

"Eoin's injury came after about 25 minutes of the game and that incident left us pretty sore in more ways than one because it only resulted in one of our fellows being booked.

"It's a bad blow for us and for Eoin. Peter (Canavan) actually made him captain for the last couple of games because he has been playing that well.

"He never played minor or under-21 for the county but the fact that he was made captain was a mark of how well he has been playing.

"Hopefully, he will be back ready for the Championship but that's it as far as the league is concerned for him."

In addition to the blows over the past fortnight, experienced players Barry Owens and Ryan McCloskey have also not been fit enough to start in recent matches.