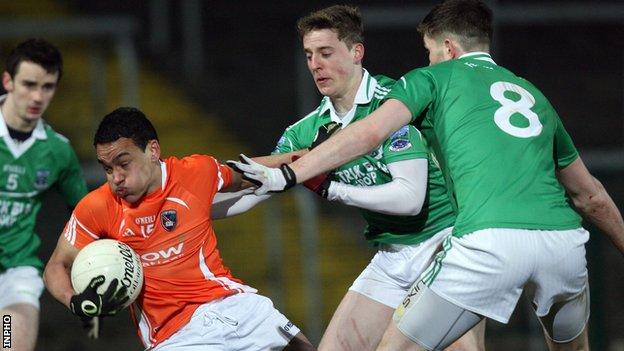 Jemar Hall fired 1-3 as Armagh defeated Fermanagh 2-10 to 0-9 in the Ulster Under-21 Football preliminary round clash at Brewster Park.

Fermanagh led twice early on but five unanswered points helped Armagh move 0-7 to 0-4 ahead by the interval.

Rafferty's goal straight after the restart put Armagh in control and Hall's three-pointer sealed the win.

Armagh led by 0-7 to 0-4 at half-time, with the sides level on three occasions inside the opening 22 minutes, but scores from captain Forker, Niall McConville, Rafferty and Hall pushed the visitors ahead by the break.

The Orchard County showed no mercy on the restart, with Rafferty bagging a quick goal to opened up a six-point lead.

Hall powered Armagh to 2-7 to 0-6 with a low soccer-style effort, and despite the efforts of Conor McAleer, Eddie Courtney, Ryan Lyons and Daniel Teague for Fermanagh, the visitors held out to book a last-eight encounter with Down next week.