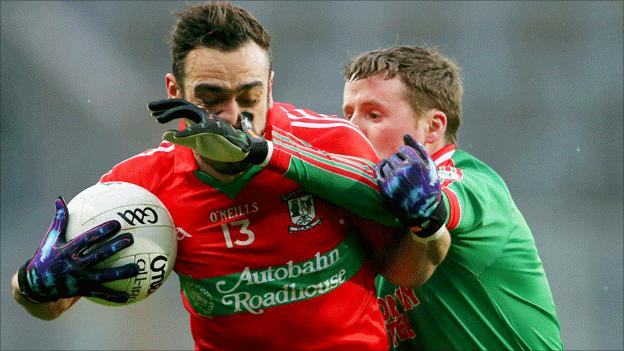 St Thomas's, who had beaten defending champions Loughgiel in the semi-finals, saw off Kilcormac-Killoughey, who ended the game with 13 men, by 1-11 to 1-9.

St Brigid's, conquerors of Crossmaglen Rangers, secured their first title with a 2-11 to 2-10 win over Ballymun.

A late Frankie Dolan point saw his side take victory in difficult conditions.

St Thomas's became the seventh Galway club to win the hurling championship when they came from behind in the final quarter to clinch victory.

Kilcormac-Killoughey failed to score in the final 18 minutes of the match.

Trevor Fletcher was the goalscorer for the losers while Richie Murray found the net for St Thomas's.

In the football decider, goals from Dean Rock and Philly McMahon to one by Senan Kilbride helped Ballymun to a 2-6 to 1-5 interval lead.