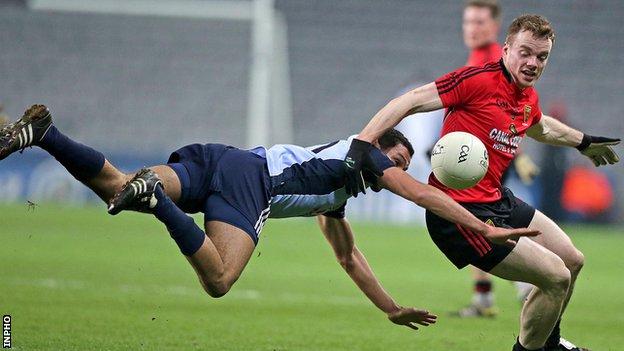 Down's chances of avoiding relegation from Division One suffered a major blow after this defeat by leaders Dublin.

The Mourne men made a blistering start at Croke Park and led a misfiring Dublin by four points before going in 0-7 to 0-5 ahead at the break.

Dublin upped the tempo on the restart and quickly moved ahead with Kevin McMamamon's goal on 50 minutes helping the hosts to a comfortable victory.

Down are one of three teams on two points but they've played a game more.

The Ulster visitors coped better with a swirling wind in the first half which contributed to Dublin missing a series of frees.

Mark Poland (2), Brendan McArdle and Donal O'Hare fired over as Down scored four of the opening five points.

Conor Laverty wasted a goal chance when he had just Stephen Cluxton to beat, but the Dublin keeper stood tall and the half-forward was penalised for over-carrying.

Dublin, who were missing star forward Bernard Brogan, closed the gap to two before a superb long-range point from Paul McComiskey made it 0-7 to 0-5.

Nicky Devereux slotted over for the Dubs while team-mate Diarmuid Connolly failed to score from two frees just before the break.

The match changed dramatically after the interval as Dublin started to convert the chances they squandered in the first half.

That honour went to McManamon, who finishing a rampaging run by blasting beyond McVeigh and into the Mourne net.

Dublin continued to pile on the points while Down looked like a side destined for the drop.

Down take on Kildare in their final match while Kerry and Mayo, who also sit on two points, have two matches remaining.