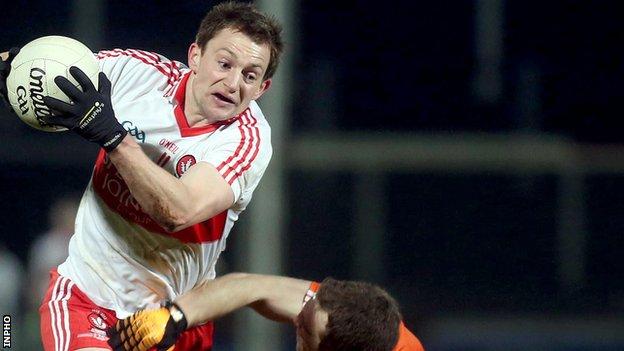 Derry bolstered their promotion hopes with a 2-14 to 1-12 Division Two win over Louth in Drogheda on Sunday.

Brian McIver's men will go up if they avoid defeat in their last game at home to the already-promoted Westmeath.

After conceding a Shane Lennon penalty in the first minute, James Kielt hit a point and then scored a penalty to put Armagh into the lead.

Louth had Mark Brennan sent-off in the second half before Benny Herron settled matters with a late goal.

Herron was put through by a ball from Daniel Haveron and, with only the keeper to beat, smashed the ball into the net.

Full-forward Lee Kennedy was a star for Oak Leafers with regular scores which helped them carve out a 1-09 to 1-04 lead.

Eoin Bradley came on for Derry and landed three frees while Enda Lynn and Gerard O'Kane also contributed to the Derry tally.

"It was a great game and was in the balance with five minutes to go," said Derry manager Brian McIver.

"We had been in control but when they got a man sent-off it really changed the game.

"They threw caution to the wind and pegged us right back but the Derry lads showed great character.

"I think we need to get something from the Westmeath game but it is a nice position to be in.

"We did not put the players under any pressure about promotion."