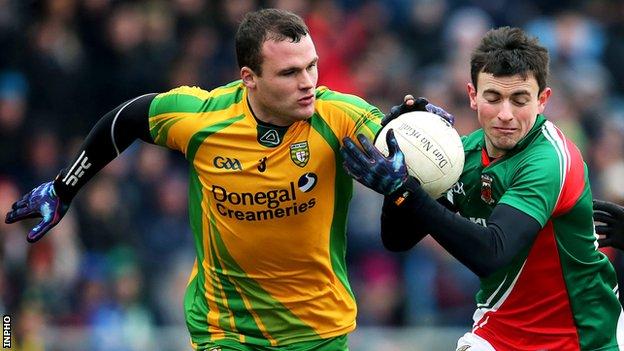 Neil McGee looks certain to miss Donegal's remaining Football League match against Dublin because of injury and could also be a doubt for the Ulster Championship tie against Tyrone.

McGee suffered a dislocated knee cap in Sunday's defeat by Mayo although the bone was later put back in place.

The defender has not suffered any broken bones but there are fears he may have suffered ligament damage.

The Gweedore man was scheduled to have a further MRI scan on Tuesday.

McGee's injury is a further blow for a Donegal defence which is already without Karl Lacey.

Last year's Footballer of the Year Lacey has been out of action since undergoing groin surgery before Christmas.

Lacey is expected to resume light training over the next couple of weeks.

A Donegal win over Dublin on 7 April should be enough to guarantee that the All-Ireland champions retain their Division 1 status although a draw or even a defeat could preserve their place in the top section depending on other results.

Down are currently at the top of the table on two points with Kerry occupying the other relegation spot on four points.

Donegal and Mayo also have four points but have significantly better scoring differences to the Kingdom.