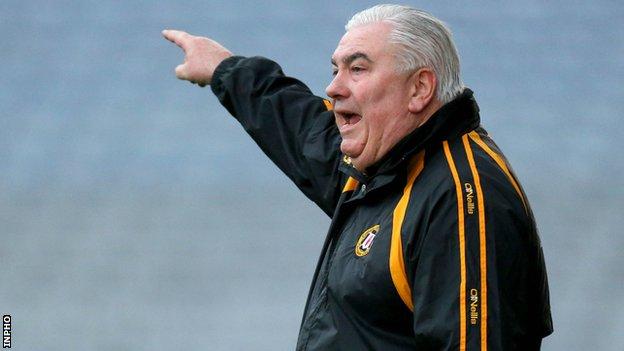 Joe Kernan is the new Crossmaglen football manager after being appointed to the role on Wednesday evening.

Kernan, who led Cross to All-Ireland Club titles in 1997, 1999 and 2000, said earlier this month that he didn't want to be considered for the role.

However, that position clearly changed as he now succeeds previous managers Tony McEntee and Gareth O'Neill.

Kernan will be in charge of a Crossmaglen squad that includes his sons Aaron, Tony, Stephen and Paul.

Full-back Paul Kernan is to have an operation on his troublesome shoulder this weekend.

The injury is expected to keep him out of action for up to four months.

The Crossmaglen native stepped down from the Rangers role in 2000 before taking the Armagh county job a year later.

In his first season with Armagh, he guided the county to its first ever All-Ireland title and Kernan also won four Ulster titles with the Orchard County during his stint before stepping away from the role in 2007.

He was appointed as Galway manager in the autumn of 2009 but resigned from that position a year later after a disappointing 2010 campaign.

However, his managerial stock has remained high in recent seasons as he guided Ulster to three successive Inter-Provincial titles including last month's final win over Leinster.

McEntee and O'Neill stepped down from their posts after three years in charge earlier this month, along with coach Seamus McGeown.

That decision came just under a month after Crossmaglen's All-Ireland Club semi-final defeat by St Brigid's of Roscommon, who went on to beat Ballymun Kickhams in the decider.

McEntee and O'Neill won back-to-back All-Ireland club titles in 2011 and 2012, as well as three Ulster Championships and three Armagh crowns.