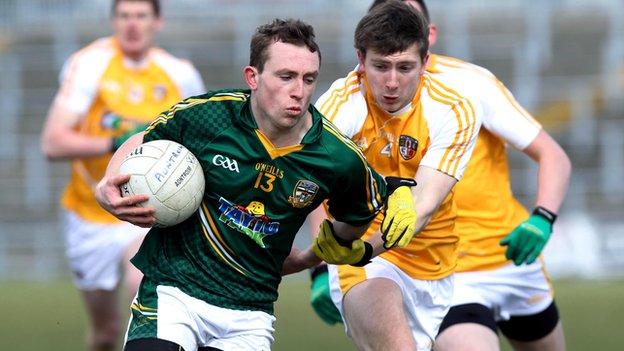 Antrim slid further into relegation trouble as they were outclassed 1-19 to 0-11 by Meath in the Division 3 Football League clash at Casement Park.

Sean McVeigh hit the opening score for Antrim but Meath, playing against the wind, responded with an unanswered 1-4 with Michael Newman notching 1-3.

Meath led 1-9 to 0-6 at half-time and then hit five more straight points.

Antrim's Dermot McCann and Conor Murray were both sent off for two bookings in the second half as Meath took the win.

Newman finished with 1-6 for Meath but all the Royals forwards looked sharp against a sloppy Antrim back line.

Meath were also completely dominant in the crucial middle third of the field exchanges with centre-fielders Brian Meade and Conor Gillespie both cleaning up in the sector.

Antrim will probably need a victory against Monaghan at Clones next weekend to avoid relegation.

The Saffrons are currently third from bottom in the table but a Sligo victory over basement outfit Wicklow will relegate Frank Dawson's Antrim side if they lose at St Tiernach's Park.

On their basis of their display on Sunday, one wouldn't put too much money on Antrim beating the promotion contenders at Clones.

The Antrim defence was all at sea in the opening 20 minutes as Meath effectively established a match-winning lead.

Meath's three-point advantage then became five as Newman continued his early scoring burst and while Kevin Niblock added to McVeigh's early point, further scores from Brian Farrell and that man Newman extended the margin to 1-6 to 0-2.

Paddy Cunningham tried to rally Antrim with a couple of fine points but the Antrim defence was proving a liability as Finucane had to make another great save to tip a goal-bound effort from Graham Reilly over the bar.

Meath's six-point half-time lead was extended to 11 as the impressive Reilly (two), Newman, Gillespie and Farrell were all on target.

By that stage, Antrim had been reduced to 14 players after Dermot McCann received his second booking.

With victory long in the bag, Meath's performance dipped somewhat in the closing stages as Antrim managed to hit five points.

But Meath finished the stronger as they hit three of the final four scores with Reilly bringing up his tally to six points.