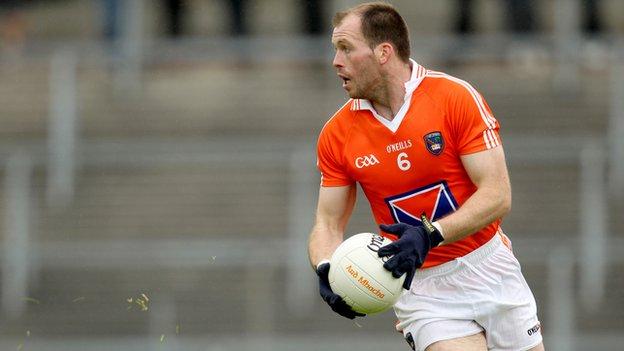 Armagh's push to stay in Division Two has been rocked by a one-match suspension for captain Ciaran McKeever.

The Armagh skipper was reported by referee Eddie Kinsella for interfering with free-taker Brian White towards the end of the narrow defeat by Louth.

McKeever did not play due to injury but stood near White as the free was taken.

McKeever is now ruled out of Sunday's crucial Division Two league clash against Galway - which Armagh must win to avoid relegation.

Louth scored three points in injury-time to snatch a vital 1-12 to 1-10 victory over in the Athletic Grounds on March 16.

Brian White hit a penalty wide near the end of the game but converted a difficult sideline free in the first minute of stoppage time to level the scores.

Prior to taking the kick, there was a minor scuffle along the sideline which was broken up by the Laois referee.

The sides were level nine times in the local derby but Louth finished strongly with late points from Shane Lennon and substitute Cathal Byrne after White's equaliser.

The result had a major bearing on league positions in Division Two.

Armagh are one point adrift of Wexford and Louth heading into Sunday's final round of games and must beat Galway to have any chance of retaining Division Two status.

"We are left heading into the most important game of the season so far without our inspirational leader and captain," said Grimley.

"It is a hugely disappointing decision, especially as they (CCC) said they were giving the ban because the incident was more likely to have happened than not to have happened.

"This will just make us more determined to win the game, to win it for Ciaran.

"We have our backs to the wall and we have to come out fighting if we want to stay in this division."