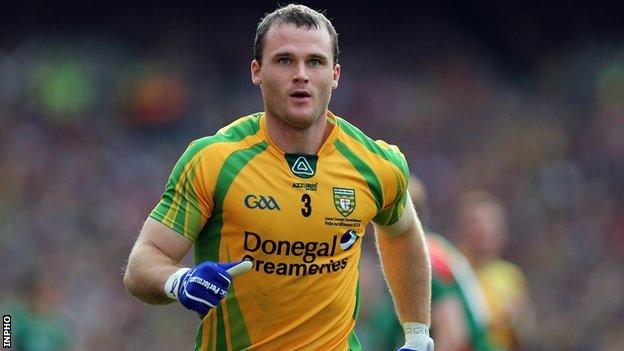 All-Ireland champions Donegal go into Sunday's crunch game against Dublin knowing they could make the Football League semi-finals - or be relegated.

Having lost four of their six matches, Jim McGuinness's team lie sixth in Division One - two points off bottom.

But, if results go their way, they could snatch a top-four place.

Gweedore full-back Neil McGee will be missing from the Donegal side at Ballybofey after limping off during the defeat by Mayo two weeks ago.

Promotion and relegation Sunday in the Football League looks like being the most exciting for years. Just about every Ulster county has something to play for.

Can Tyrone relegate Kerry from Division One? That's our main commentary match with Owen McConnon and Brian Canavan.

Elsewhere, we've commentators and reporters at all the matches which matter.

Can Donegal beat the Dubs in Ballybofey to stay in the top flight? Could Down perform the Great Escape against Kildare?

Will Derry complete their relegation push from Division Two? Will Armagh be able to stop their slide towards Division Three?

Oisín McConville and Adrian McGuckin will be alongside me, Austin O'Callaghan, in studio. And yes - the pocket calculators are at the ready…

Karl Lacey is still sidelined with a groin injury but Donegal report that the 2012 footballer of the year is back in training and on course for the big 26 May Ulster Championship clash with Tyrone.

If Donegal lose to Dublin, they will hope that Tyrone beat Kerry at Healy Park as the Kingdom would be relegated having lost to Donegal earlier in the season.

Tyrone, who give corner-forward Darren McCurry his first league start, will finish first or second in Division One and will face Kildare, Cork or Mayo in the 14 April semis.

Down, bottom of Division One with two points out of a possible 12, look certain to be relegated no matter how they fare at home to Kildare.

Even if James McCartan's men won by a huge margin at Newry, they would need other results to fall favourably for them.

In Division Two, Derry will definitely be promoted if they avoid defeat at home to the already-promoted Westmeath.

Even if they lose, Brian McIver's second-placed side have a good chance of going up to the top flight.

One-from-bottom Armagh look doomed, especially as they are without suspended captain Ciaran McKeever for their home game against Galway.

They would need to beat the Westerners and hope that Wexford or Louth lose.

If Fermanagh lose, Monaghan could go up by beating Antrim.

Although Fermanagh and Monaghan currently occupy the top two spots, the likelihood is that Meath plus either Fermanagh or Monaghan will go up.

Cavan are safe from relegation but it would take a bizarre set of results for them to gain promotion. They would require a big win over Roscommon, then pray that Monaghan lose or draw with Antrim and that Meath do not beat Fermanagh.

Antrim would be relegated to the bottom division if they lose to Monaghan and Sligo beat Wicklow.