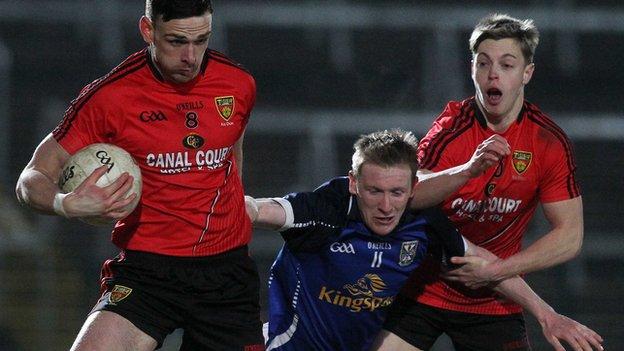 Cavan are through to a third Ulster Under-21 football final in a row after a convincing 1-12 to 0-6 victory over Down at the Athletic Grounds.

They will play Donegal who beat Derry 2-11 to 0-15 in Wednesday's other semi-final at Healy Park.

Cavan led by 0-9 to 0-2 at half-time, Enda O'Reilly catching the eye with some superb left-footed scores.

Paul O'Connor drilled the ball into the roof of the net 30 seconds after the restart to stretch Cavan's lead.

Down defender Michael Hughes was red-carded in the last minute of the game.

Cavan, chasing a hat-trick of Ulster U21 titles, fielded 10 players who won the title last year and three from the 2011 Ulster-winning team.

That experience showed from the very start as they raced into a three point lead in the opening five minutes.

Enda O'Reilly hit three spectacular long-range frees with his left foot to stretch Cavan's lead to 0-7 to 0-1 before Ryan Johnston scored Down's only first-half point from play after 22 minutes.

Stunned Down badly needed a moment of magic and Niall Madine almost provided it, however his goal-bound shot was saved at point-blank range by Cavan keeper Conor Gilsenan.

O'Connor's goal after the interval put Cavan 10 points up but Down responded with their best spell of the game and hit three unanswered points, including two from Danny Savage.

Cavan were on top in almost every position, however, to easily close out the game and progress to an Ulster final against Donegal.