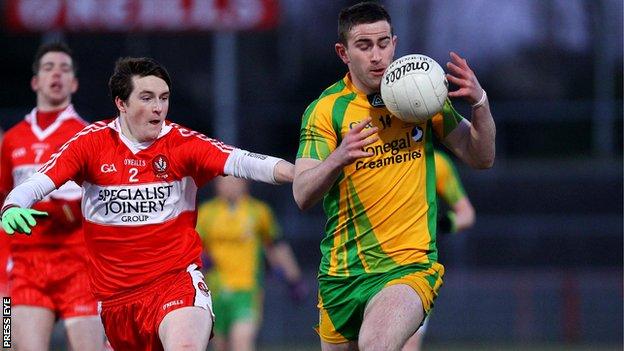 Donegal set up an Ulster Under-21 final against holders Cavan with a nail-biting 2-11 to 0-15 win over Derry.

After leading by six points, they were left clinging on for victory, and Derry almost stole it when Ryan Bell sent a shot crashing against the crossbar.

Odhran MacNiallais punched home a 10th-minute goal from Paddy McBrearty's pass to give Donegal the advantage.

Derry hit back with a string of scores to lead but were then hit by a second Donegal goal scored by Caolan Ward.

Donegal had led by 1-4 to 0-3 at Healy Park when Derry suddenly sparked to life.

They hit five points without reply, three of them from Bell frees, with Aaron Devlin also on target, as they moved into the lead.

McBrearty ended a 15-minute barren spell with his third point to tie it up at 1-5 to 0-8 at the interval.

Donegal got back on track with a second goal less than two minutes into the second half, McBrearty's magical creativity sending full-back Ward in to poke the ball past Christopher Bradley.

But Derry rallied with another volley of points and, in a dramatic finish, they just lost out as the Donegal defence creaked, but survived.