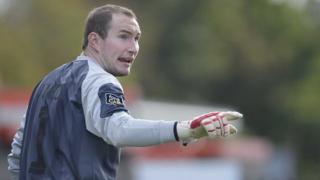 Crusaders goalkeeper Sean O'Neill hopes to play in the Irish Cup semi-final against Cliftonville after his speedy return from injury.

It had been thought O'Neill would miss the rest of the season after sustaining a shoulder injury against Linfield in January.

But he told BBC Sport NI he is ready to return for the cup clash between the top two clubs in the Irish Premiership.