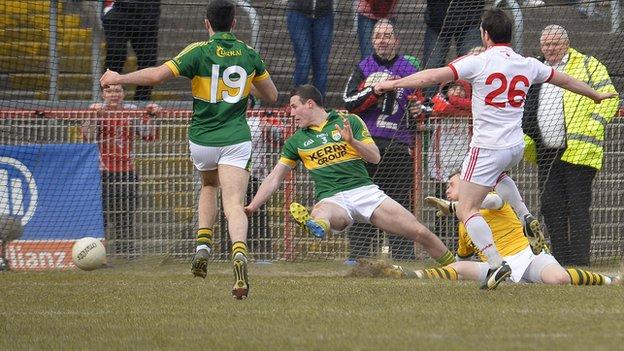 Tyrone came close to spoiling the party for resurgent Kerry, who came to Healy Park and won by a point to hold on to their Division One status.

Kerry produced a quality first half display that saw them run the Red Hands ragged on their way to a 12-point lead.

But wind-assisted Tyrone came roaring back in the second half with goals from Stephen O'Neill and Mark Donnelly.

They could have stolen it as substitute Martin Penrose saw his effort crash against a post.

The Red Hands, playing into a strong breeze, were on the back foot for almost the entire first half, and by the 10-minute mark they trailed by 0-6 to 0-1, with Colm Cooper imperious as playmaker, setting up scores for Kieran Donaghy and Declan O'Sullivan.

Tyrone keeper Niall Morgan converted a long-range free to add to Ronan O'Neill's early score, but Tyrone were putting out fires all over the field.

Donaghy, Lyne and Johnny Buckley added to the Kingdom tally, and in the 32nd minute Tomás Ó Sé punched home a goal to give them a massive 1-13 to 0-5 lead.

Tyrone grabbed a lifeline five minutes into the second half, Penrose sending Stephen O'Neill to finish past Brendan Kealy.

Conor Gormley, Conor Clarke and Darren McCurry added further scores as Tyrone cut the gap to four, before Cooper swung over a 20-metre free to make it a five points game.

But back came Tyrone again and, after Sean Cavanagh had split the posts, Mark Donnelly punched home a stoppage-time goal.

Subs: B Maguire for Brosnan, K O'Leary, for Darran O'Sullivan, D Walsh for Galvin, B Sheehan for Buckley.