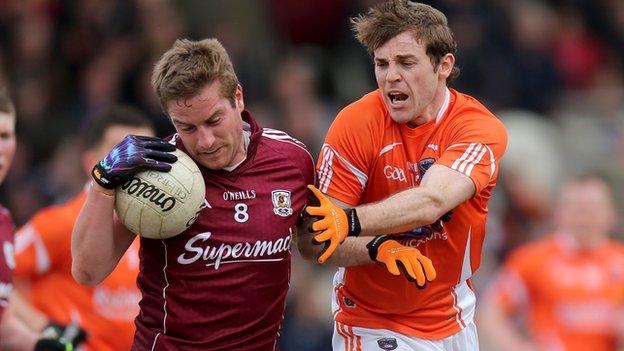 Armagh made sure of Division Two survival by beating Galway 0-21 to 1-12 at the Athletic Grounds on Sunday.

They made a great start to lead by five points after 12 minutes thanks to scores from Kevin Dyas, Tony Kernan, Aaron Kernan 2 and Stephen Harold.

Michael Meenan landed a point for Galway who then got their goal with Conor Doherty hammering into the net after a fine sweeping move.

Five unanswered points in the second half made sure of Armagh's victory.

But Paul Grimley's men did not have it all their own way.

After trailing 0-10 to 1-3 at half-time, Galway rattled off four points without reply in a seven-minute spell to tie things up.

In the end, Armagh got home by six points and the display certainly met with the approval of county boss Grimley.

"It was fantastic. That sort of performance had been coming because we had been racking up high scores.