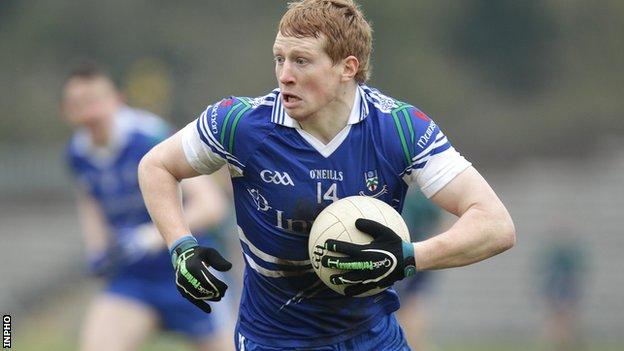 There were mixed fortunes at Clones as Monaghan were promoted from Division Three after their 3-16 to 0-13 win over Antrim, who have been relegated.

Christopher McGuinness and Darren Hughes netted while Kieran Hughes, the other Farney goalscorer, was sent off.

Fermanagh missed out on promotion following a 2-12 to 0-14 defeat by Meath, who will meet Monaghan in the Division Three final.

Cavan were defeated 2-14 to 1-7 by Roscommon at Breffni Park.

Monaghan made the perfect start with McGuinness scoring the opening goal in the first minute after good work from Drew Wylie.

Kevin Hughes crashed in a second goal after 30 minutes as the hosts went in 2-9 to 0-7 ahead at the break, with Paddy Cunningham firing over five points for the Saffrons.

Darren Hughes netted 14 minutes into the second half to effectively end Antrim's hopes of a comeback, even though Kieran Hughes was dismissed for two yellow cards.

The Saffrons needed Sligo to lose to stay up but their win over Wicklow has condemned Frank Dawson's side to Division Four.

Antrim and Monaghan will meet again in the Ulster SFC in June and Farney boss Malachy O'Rourke believes the Casement Park game in June will not be so easy.

"We are delighted to get the win and secure promotion," said O'Rourke.

"We knew Antrim would be tricky opponents but we got a good start and kept the lead.

"Antrim battled hard but we got the goal at the right time - they had a lot of players missing and it will be a completely different team when we meet them in the championship."

Fermanagh needed just a draw to clinch promotion but they fell four points short against Meath in Navan.

Michael Newman netted a penalty after 27 minutes to leave it level at 1-5 to 0-8 at the break.

Martin Dunne scored a 13th-minute penalty for the Ulster side but Roscommon led 1-7 to 1-3 at the interval before surging clear in the second half.