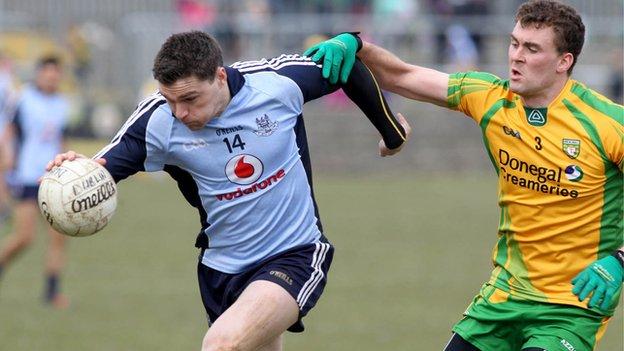 A win would have kept the All-Ireland champions in the top flight and they were on target as Colm McFadden's goal helped them lead 1-6 0-6 at half-time.

But Jack McCaffrey landed a point for the Dubs and then Mannion levelled to give Dublin top spot and a home semi-final against Mayo on 14 April.

The game had a major moment of controversy eight minutes from time as Donegal appeared to be denied a blatant penalty as Rory Kavanagh looked to have been fouled by Jason Whelan.

However, substitute referee Michael Duffy, who had replaced injured Padraig Hughes, merely awarded a 45 after the challenge, much to the consternation of the Donegal players and supporters.

Mark McHugh's opening for Donegal was quickly followed by the only goal of the game.

Ross Wherrity found Patrick McBrearty who fisted over to McFadden who shot low into the corner.

Two Mannion frees and two points from Paddy Andrews ensured Dublin were just three behind at the break.

They stayed in touch in the second half and finished strongest to secure the draw.

Dublin finish top of Division One because Tyrone lost by a point at home to Kerry who had started the day level on points with Donegal and Mayo.