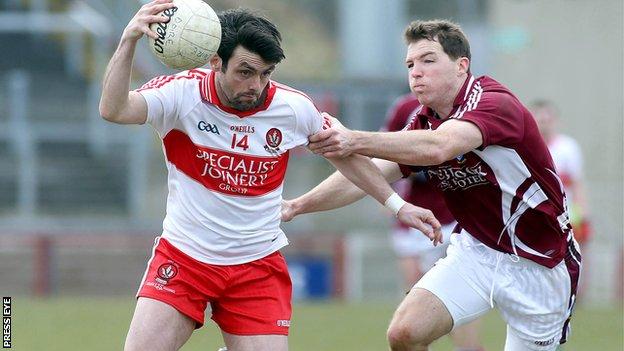 Derry guaranteed promotion to Division One after an emphatic 2-17 to 1-05 win over Westmeath.

James Kielt scored both Derry goals with penalties against an under-par Westmeath who have secured promotion themselves.

The first penalty came in the 34th minute after Lee Kennedy had been hauled down by Damien Dolan.

The second, after the interval, and was awarded when Kielt was brought down after taking Gerard O'Kane's long ball.

"We wanted to finish top and that was in our own hands," said O'Kane afterwards.

"Westmeath might not have been at their strongest, but we are pretty happy."

Derry had scored the first three points of the game, Kennedy scoring twice and Eoin Bradley getting the other.

Dessie Dolan pointed for Westmeath but then came the penalty which helped Derry establish at 1-6 to 0-3 advantage by the break.

Bradley and Kennedy scored again early in the second half but in the 42nd minute Paul Sherry set up Dessie Dolan who scored the visitors' goal with an unstoppable shot.