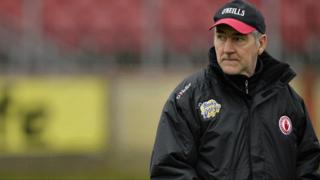 Harte pleased despite defeat by Kerry

The Red Hands were 1-13 to 0-5 down at half-time at Healy Park but Kerry were left relieved at the final whistle after they held on for a 1-16 to 2-12 win which proved enough to keep the Kingdom in Division 1.

"We almost pulled off a magnificent win and this second-half display will give us impetus for the (Division 1) semi-final against Kildare next weekend," said the Tyrone manager.