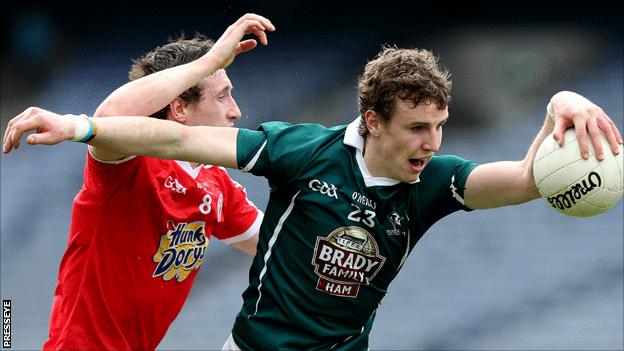 Tyrone reached the Football League Division One final by beating Kildare in an entertaining game at Croke Park.

A Matthew Donnelly goal was just reward for the Red Hands' lively start but Paddy Brophy found the net as Kildare led by one point at half-time.

Paul Gribben was the other Kildare goalscorer but Tyrone will face Dublin, who beat Mayo, in the 28 April decider.

Mickey Harte's side, showing six changes from their last outing, began the game well and Martin Penrose missed a goal chance with only the goalkeeper to beat.

O'Neill opened the scoring soon after, before Matthew Donnelly found the corner of the net.

Padraig O'Neill was prominent as Kildare clawed their way back into the match and took advantage of some Tyrone errors to level at 1-3 to 0-6 thanks to Johnny Doyle's second free of the tie in the 26th minute.

Kildare were playing the better football and could have been well ahead during the first period, but for some poor finishing.

Brophy netted at the second attempt to make it 1-6 to 1-4 after Niall Morgan had made a fine save from an initial attempt.

A Sean Cavanagh point reduced his side's deficit to a single point, 1-6 to 1-5, at the interval.

Penrose pointed to bring the teams level soon after the break and a superb finish by Mark Donnelly on 37 minutes gave the Ulster county a three-point advantage.

Kildare scored regular points to keep in touch but Aidan Cassidy, substitute Connor McAliskey (2), Matthew Donnelly and O'Neill knocked the ball between the posts to keep Tyrone ahead.

Gribben's goal and a further point brought Kildare to within a point at 2-12 to 2-11 but some fine points by O'Neill from improbable angles saw his side over the line.

Tyrone manager Mickey Harte described the match as "a good workout for both teams".

"We're in the final for the first time in 10 years and I welcome another competitive workout ahead of the Championship. It's good to be winning and it's good to be appearing in finals.

"Stephen O'Neill scored some sublime points - he's a phenomenal player and a pleasure to watch."