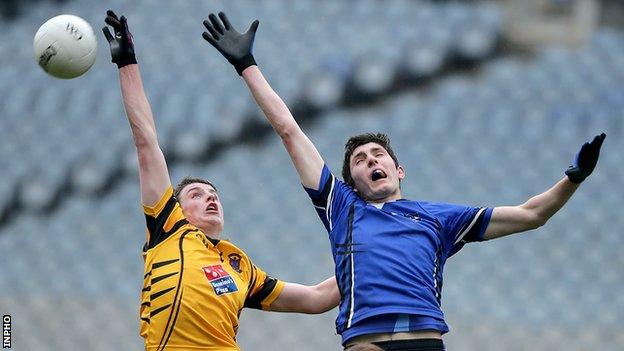 St Patrick's Maghera clinched their fifth Hogan Cup title and first since 2003 as they beat St Patrick's Navan 1-20 to 1-10 at Croke Park.

The Maghera school led 0-10 to 0-5 at half-time and Danny Tallon's 46th-minute goal kept them in control.

Holders Holy Trinity Cookstown were beaten 2-13 to 2-12 by Granard in the Vocational Schools Final.

Maghera played champagne football in the first half and some wonderful scores from Neil McNicholl, James Kearney and Stephen O'Hara saw them take an early foothold.

Cathal Mulholland saw a dipping shot come back off the crossbar as they swept forward in waves of attack.

Navan did make use of their sporadic attacks, pulling back points through Niall Lyons and James McEntee.

But the Ulster lads were looking good at the break, all but one of their scores coming from open play as they lead by 0-10 to 0-5.

Robert Keeleghan gave Navan a lifeline with a goal early in the second half but the south Derry college hit back with Tallon's goal in the 46th minute.

Bradley, Neil McNicholl and O'Hara hit a combined total of 12 points as Maghera saw out the game in a controlled and composed fashion, picking off spectacular points at will.

In the curtain-raiser, Ryan Loughran grabbed an early Cookstown goal but that was cancelled out by Nigel Rabbitt's three pointer.

An Aidan McElligott goal helped Granard lead by 2-7 to 1-4 at the break and they were ahead by nine going into the final 12 minutes.

Cookstown substitute Jason Rocks grabbed a goal and they narrowed the gap to a single point but the Longford lads held out.