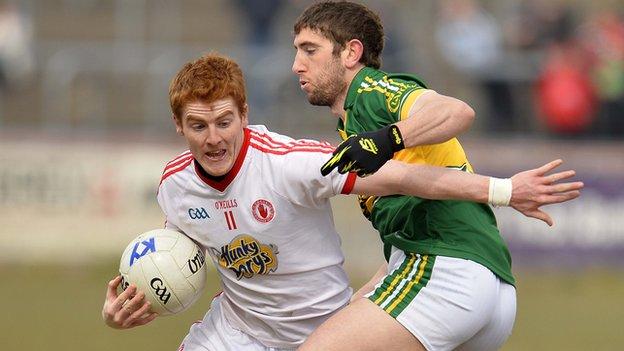 Tyrone boss Mickey Harte has admitted that Peter Harte is "very doubtful" for the Division One final against Dublin at Croke Park on 28 April.

Harte sustained a hamstring injury in Sunday's semi-final win over Kildare at Croke Park and is under supervision.

On a more positive note, Joe McMahon is expected to play after a groin injury.

"Joe is such a versatile player and such a composed player - he's very important to the team and he's a huge loss when he's not there," said Harte.

"To go into the game without Peter would be a huge loss though," added the Red Hands manager.

Kyle Coney has resumed contact training after a shoulder injury which forced him out six weeks ago and he and Ronan O'Neill could yet feature in the match day squad.