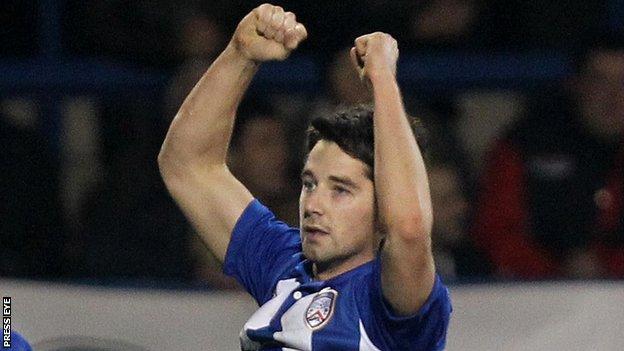 But in first-half injury-time, Michael Carvill struck the Blues ahead after good work by Mark McAllister.

Allen levelled on 55 minutes after an excellent curling cross from Paul Owens before the game lost impetus.

Ryan McIlmoyle's industry for Coleraine was a feature of the early action but Linfield then had a couple of chances with keeper Doherty denying Thompson and Lowry.

After Burns hit his own woodwork, the match seemed certain to be goal-less at half-time but the Blues had other ideas as McAllister set up Carvill to score in the second minute of added time.

Former Blues striker Allen headed the Bannsiders on terms 10 minutes after the restart after Ruairi Harkin's run and pass released Owens who crossed superbly to the goalscorer.

The contest became increasingly scrappy in the final 30 minutes although Linfield sub Conor McMenamin was inches away from notching a late winner as he just failed to reach a McAllister cross.