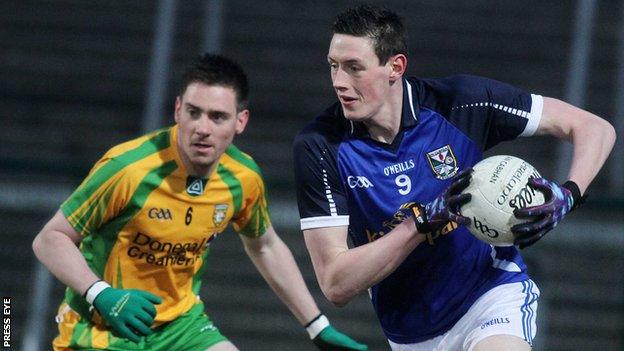 Cavan U21 footballers will aim to stay on course to add the All-Ireland title to their Ulster crown when they face Cork at Tullamore on Saturday (15:45).

The Breffni boys sealed a third successive Ulster title when they edged out Donegal last week.

On the same night, Cork easily accounted for Tipperary 1-17 to 0-9 in the Munster decider.

Centre half-forward Conroy kicked three long-range points in the Ulster Final and manager Peter Reilly will be hoping for more of the same at Tullamore.

Free-taker Jack Brady and Enda Reilly are among other influential performer for Cavan while Killian Clarke's expected duel with Cork dangerman Brian Hurley could be crucial.

After winning the Ulster title in 2011, Cavan reached the All-Ireland final where they were well beaten by Galway.

Last year, Cavan were fancied to at least repeat that feat but Terry Hyland's side were beaten 2-7 to 2-2 in the All-Ireland semi-final in Longford.

Most pundits reckon the Cavan Under-21 class of '13 will face an even stiffer task at O'Connor Park but the Breffnimen showed impressive form in defeating Monaghan, Down and Donegal in the Ulster Championship.

Cork go in as favourites but Cavan are far from being no-hopers.