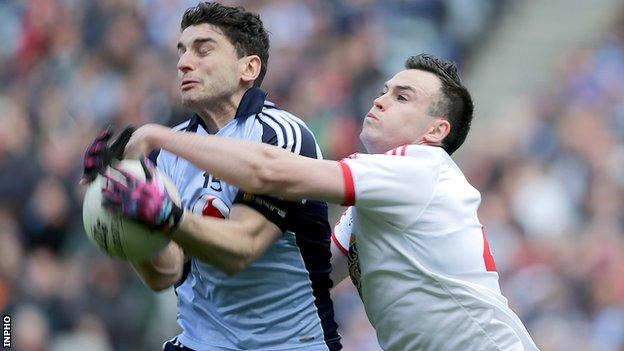 Dublin edged out Tyrone in a thrilling Football League final played at a fierce pace at Croke Park.

Tyrone suffered a blow before the start as Stephen O'Neill was ruled out by injury as Dublin moved 0-4 to 0-1 up.

For all but a minute of the second half, there wasn't more than a point in it but sub Dean Rock's two late scores helped the Dubs snatch victory.

Martin Penrose's 67th-minute free had edged Tyrone ahead at 0-16 to 0-15 but Ballymun star Rock, the son of former Dublin legend Barney Rock, responded with two stunning scores to put Dublin back into the lead.

Sean Cavanagh cut the margin with a point in the first minute of injury-time and he was at the centre of controversy at the final whistle as referee Marty Duffy blew up for full-time after the Tyrone star appeared to have been fouled.

In addition, Duffy's decision to only play only one minute of injury-time, instead of the normal two or three, looked questionable.

But on balance, the Dubs probably just about deserved to edge the verdict although Tyrone's greater economy of effort in fashioning scores for much of the contest had suggested that they might emerge the victors.

Keeper Morgan finished with a remarkable five points for the Red Hands in addition to making a couple of marvellous saves and was named man of the match.

Matthew Donnelly and Mark Donnelly were both hugely impressive in the Tyrone attack with Sean Cavanagh also back to his best.

But perhaps the most positive aspect of the performance for Mickey Harte will be the performance of his defence who produced tenacious tackling reminiscent of that displayed against Kerry in the 2003 All-Ireland semi-final.

Tyrone's shooting was the more accurate for the opening two thirds of the contest but the Red Hands kicked a number of bad wides in the second half while substitutes Plunkett Kane and Kyle Coney were also guilty of kicking scoring attempts into Stephen Cluxton's hands.

Talisman O'Neill was ruled out before the start after suffering an ankle injury in the warm-up and was replaced by Connor McAliskey.

But McAliskey's score began a period of Red Hand dominance and they were on terms by the 17th minute after Morgan's first long-range free.

Dublin led by two on four occasions during the remainder of the first period but Tyrone pegged them back each time with Morgan and McAliskey hitting the final scores of the half to level at 0-10 to 0-10.

Another Morgan point put Tyrone ahead after the restart as the game continued to be played at a Championship pace.

However, the impressive Paul Mannion quickly levelled and that was the pattern for the 30 minutes as Tyrone led by one on five occasions only for Dublin to get on terms each time.

In the end, Dublin's bench probably proved the difference as Rock and Kevin McManamon added strength and energy to their attack in the closing 10 minutes.

But for the Championship ahead, Tyrone should take great heart after a performance which suggested that they will be at the business end of this year's All-Ireland campaign.