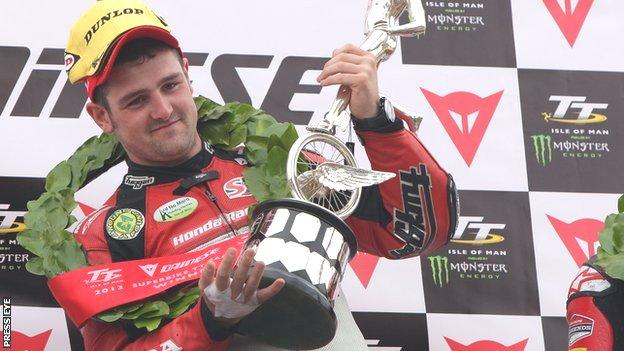 Michael Dunlop comes with exemplary pedigree, the Dunlop name having been synonymous with the Isle of Man TT for more than three decades.

This year, the nephew of Joey and son of Robert is perpetuating the legend of 'the first family' of road racing with a red-hot winning streak on the famous Mountain Course.

The Ballymoney rider began his 'tour de force' with a stunning victory in the Superbike race to become the first member of the Dunlop dynasty to win one of the showpiece 'big bike' classes since his uncle's famous triumph 13 years ago.

The fact that his victory came 30 years to the day since Joey secured his first island success on a Honda only served to add to the poignancy of the occasion.

That anniversary was marked by the Japanese manufacturer as Michael's team-mate John McGuinness donned identical leathers and livery to that which the record 26-time winner sported in the 2000 Formula One race.

"I never had the chance to race with Joey but to see John in those colours and on that bike was mesmerising. It was as if he was out there on the track again," said Michael.

There was no pressure from Honda to become fitter, I just thought that if a big team is going to put their trust in me to go out and win races, then it's up to me to be in the best shape I can be

Joey's popularity was epitomised by the type of hero worship and adoration normally reserved for rock stars, and his untimely death in 2000, followed eight years later by the passing of his brother Robert, plunged the biking fraternity into mourning.

The names of the revered brothers are still celebrated at an event which is steeped in heritage and tradition.

Over the past decade, McGuinness has assumed the title of 'King of the Mountain', racking up 19 wins, but now 'heir apparent' Michael Dunlop has moved out of the shadows of the Morecambe man, is close to stealing his crown, and seems set to be the dominant force for years to come.

"Michael has raised the bar to a new level. I've had 10 years at the top and now it may be time to hand the baton on," admitted McGuinness.

"I've never seen anyone ride the TT course like that before. I was speechless at how fast he was going," said a clearly awestruck McGuinness after finishing third in Monday's Superstock event.

For his part, Dunlop is proud to bear the name of road racing royalty, but is also keen to earn respect in his own right as he realises his potential as the hottest property in the most unforgiving of sports.

"The thing about being a Dunlop is that some people think the best bikes just come to you because of your surname, but I've gone out and earned my place as a factory Honda rider by proving that I can go fast and will give 100% in every race in a bid to win," argued the 24-year-old.

At the age of just 19, Michael surprised the watching world by making a last-minute decision to compete at the 2008 TT, just a few weeks after the death of his father at the North West 200 - seeking solace in a return to the environment in which he felt most comfortable and going back to doing what he did best.

The first indication that he was set for a meteoric rise to stardom came the following year when he claimed a hugely impressive win in difficult, changeable conditions in one of the Supersport races.

The two-time North West winner felt that he did not get the credit he deserved for that maiden success and after a blank year in terms of victories in 2010, he occupied the top step of the podium as a privateer in the Superstock and Supersport classes respectively in 2011 and 2012.

This season he made his intentions clear from the off by losing more than three stone in weight during the winter thanks to regular training in the gym and a disciplined dietary regime.

"There was no pressure from Honda to get fitter, I just thought that if a big team is going to put their trust in me to go out and win races, then it's up to me to be in the best shape I can be."

Michael sounded a further warning to his rivals by setting the fastest lap speeds as a member of the Honda TT Legends team at the Bol d'Or 24-hour World Endurance race in April, plus dominant displays at the Irish national road races and a first four-stroke win at the North West.

The combination of backing from the most successful team in the paddock for the Superbike races and running his own team with support from personal sponsors under the banner of 'MD Racing' in the other classes appears to be a perfect one.

"I had a good Superbike in 2010 and managed a lap at over 130mph, but I've had loads of problems with the big bikes since then, so it's good to be on a machine that I know is as good as anything out there," stated Dunlop.

Highly motivated, intense, driven and straight-talking, Dunlop, like all successful sporting competitors, derives satisfaction from winning rather than competing.

As he attempts to equal, or even better, Ian Hutchinson's feat of five victories in one week his winning march may have the knock-on effect of protecting his uncle Joey's record as the odds lengthen considerably on McGuinness matching that long-standing benchmark.

A breathtaking final lap in the Superstock race, just 3.5 seconds outside the absolute course record, served to emphasise the County Antrim man's superiority, as some of the best road racers in the world have been relegated to the role of supporting cast at this year's TT.

Allied to his determination, Dunlop has displayed an ability to up the pace just when he needs that vital edge over his rivals.

Phillip McCallen, the last Northern Ireland rider to enjoy a comparable winning run with four successes in 1996, says Michael "revels in being a maverick and has learned to ride aggressively, without being out of control".

"He goes as hard as he can and tries to break the opposition from the start, then rides just as fast as he needs to for the remainder of the race," said McCallen.

Ironically, in the future, it may be Joey Dunlop's nephew who poses the biggest threat to his record-breaking tally of TT wins.