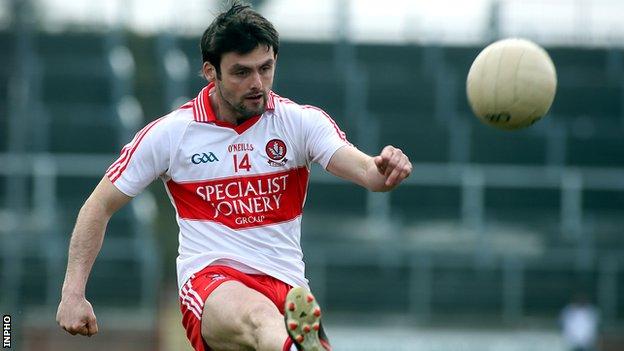 Eoin Bradley will miss the start of Derry's All-Ireland qualifier series after damaging a shoulder in a club game, but will not require surgery.

Forward Bradley damaged an AC joint when contesting the first ball of Glenullin's league game against Kilrea and is ruled out until the end of July.

An MRI scan confirmed a slight dislocation of a collarbone from the shoulder.

Bradley starred in Derry's Ulster's SFC defeat to Down at Celtic Park.

He is set to be absent for six weeks as a result of the injury but should be fit to return should the Oak Leafers reach the latter stages of the qualifiers or the All-Ireland quarter-finals.

The injury is also a personal set-back for Bradley, who spent a year on the sidelines with a cruciate injury sustained prior to the county's Ulster final appearance against Donegal in 2011.

His older brother Paddy is nursing his way back to full fitness after a double cruciate injury.

Derry have been hit with a fresh injury blow with Gerard O'Kane suffering a hamstring injury during a club match with Glenullin, which could see him miss training for a couple of weeks.

Manager Brian McIver has been boosted however by the news that PJ McCloskey, Barry McGoldrick, Dermot McBride, Michael Bateson and Sean Leo McGoldrick have returned to fitness an training after missing the clash with Down.

Meanwhile Kevin Niblock faces an uphill battle to recover from an ankle injury in time to play a part in Antrim's qualifier campaign.

Niblock was forced to retire at half-time during the weekend defeat by Monaghan at Casement Park.

In a further setback for the Saffrons, James Laverty has had a transfer from Cargin to St Brendan's of San Francisco sanctioned.