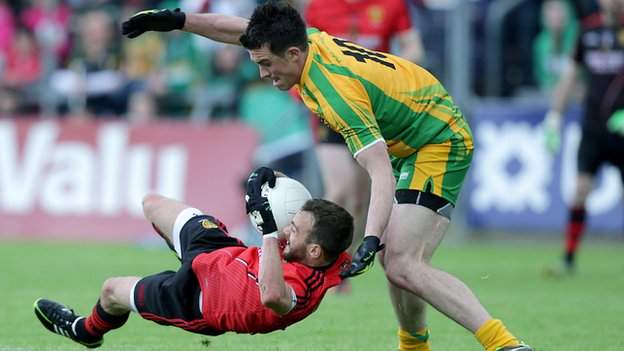 Donegal manager Jim McGuinness says his side must improve if they are to win a third consecutive Ulster SFC title.

The All-Ireland champions inched to a 0-12 to 0-9 win over Down in their semi-final at a blustery Breffni Park.

"We got over the line but we must try to improve ourselves ahead of the final. Our lads found a way to win the game and we live to fight another day.

"It was a very attritional game, a real battle, but we had big leaders and we got the job done," said McGuinness.

"Before the game, there was a lot of talk about us racking up a big score but Down set their stall out early.

"We played really well against the breeze in the first 25 minutes but lost our way a bit after that," added the Donegal boss.

Forward Patrick McBrearty admitted that it "was not one of our best displays".

"Down pushed us right to the wire and we will not be happy with that performance - we have to regroup and we are still on course to defend our title," said McBrearty.

Mark McHugh added that the Mournemen had been "hard to break down" but "thankfully we hung on".

"We lost Frank McGlynn and Ryan Bradley, but the players who replaced them did very well."

Man-of-the-match Colm McFadden admitted that his side had been in "a serious battle" and that "Down really put it up to us for the whole match".

"We just couldn't shake them off - every point we scored, it seemed that they replied straight away."

"We are devastated - we came to win the game and we didn't do it," said defeated Down manager James McCartan.

"We knew the way the teams were set up that it wasn't going to be a high scoring game but we didn't take our chances, while Donegal's ability to nick points proved crucial.

"I thought we opened them up and had them on the back foot at times, particularly in the last 15 minutes, but we just fell short."