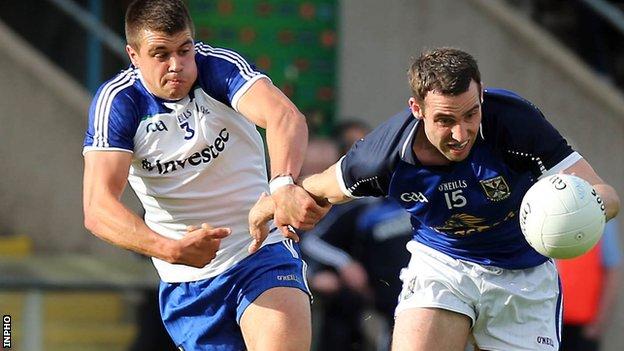 Monaghan edged out Cavan in a drab and scrappy Ulster Football semi-final to set up a decider against holders and All-Ireland champions Donegal.

Cavan led 0-2 to 0-0 before Christopher McGuinness scored Monaghan's goal and while the Breffni men then moved two ahead, Monaghan levelled by half-time.

Monaghan eventually pulled two ahead in a tight second half and it proved enough despite late Cavan pressure.

Cavan keeper Conor Gilsenan cut Monaghan's lead to the minimum in injury-time with a long-range point and the match then ended in a degree of controversy as Farney goalkeeper Rory Beggan appeared to have over-carried the ball after a free was played back to him.

However, referee Marty Duffy allowed play to go on and Monaghan were able to run down the clock as they worked the ball downfield.

Monaghan celebrated heartily after the final whistle as they qualified for their first provincial decider since their 2010 defeat by Tyrone.

However, despite a few impressive individual displays, on this evidence of this overall team-performance and the previous win over Antrim, it's doubtful that even the most passionate of Monaghan fans will expect their team to trouble the All-Ireland champions on 21 July.

Both teams made late changes to their published line-ups with Tommy Freeman and Gavin Doogan replacing injured Dick Clerkin and dropped Paul Finlay in the Monaghan line-up and Killian Brady displacing Jack Brady in the Cavan side.

The match had an early talking point with Monaghan having claims for both a goal and a penalty in a fifth minute incident with McGuinness' scrambled shot appearing close to having crossed the line before Cavan defender Alan Clarke scooped the ball away with his hand.

At the very least, it should have been a penalty but referee Duffy waved play on with his umpires, apparently, not in a position to draw his attention to such a technical foul.

Boosted by the escape, Eugene Keating and David Givney hit Cavan points but Monaghan were ahead by the 13th minute as Gilsenan's attempted quick kick-out was grabbed by Darren Hughes who released a charging McGuinness to net from point-blank range.

But Cavan regrouped to hit three unanswered points with the middle score being notched by the impressive strong-running Cian Mackey.

However, Monaghan responded with four of the next five scores with McManus notching three of those scores.

Martin Dunne, not the force he was in Cavan's two previous matches, did restore the Breffni team's lead before the break but Darren Hughes levelled with the point of the half in injury-time time after a fine midfield fetch and surge upfield.

Play became decidedly scrappy after the break with the scoreboard not changing until a 48th-minute McManus point.

By now both Clerkin and Finlay had been introduced for Monaghan but Cavan were ahead again by the 54th minute after two Niall McDermott frees.

Frees from Finlay and McManus restored Monaghan's advantage by the 59th minute and while Dunne levelled a minute later, McManus scored the point of the match to edge the Farney men ahead by the 62nd minute.

Keating was off-target from two chances to level in quick succession from distance and the misses proved expensive as a further Finlay free edged Monaghan two clear with a minute of normal time left.

Keeper Gilsenan's free in the second minute of injury-time kept Monaghan's hopes alive and then came the late talking point as his opposite number Beggan was adjudged not to have over-stepped as he found himself surrounded by Cavan attackers near his own 20-metre line.