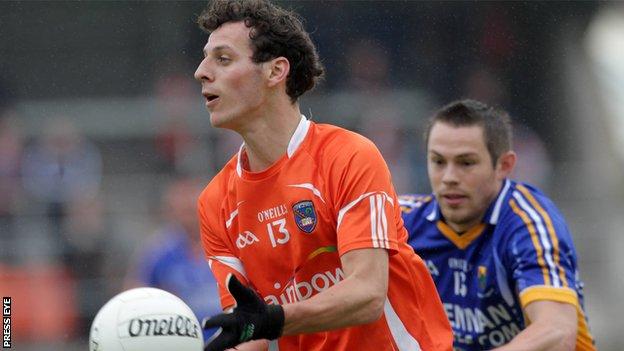 Armagh cruised into the second round of the All-Ireland football qualifiers by crushing Wicklow 2-21 to 0-2 at the Athletic Grounds on Sunday.

Two goals by forward Jamie Clarke inside the opening five minutes set the tone for what turned out to be a landslide victory.

The first was a penalty after Clarke himself had been tugged back.

After the hugely disappointing defeat by Cavan in the Ulster Championship, this was a performance Armagh badly needed and all six starting forward were among the scorers.

And, not for the first time, the talented Clarke played a leading role.

The Crossmaglen star, who turned 24 on Friday, scored three points in the match to add to those early goals and deserved his standing ovation when substituted late in the game.

Armagh boss Paul Grimley, who came under fire after that Cavan defeat, was relieved to go through.

"I apologised to the fans after the Cavan game because they are loyal and our tactics were exposed that day," he said.

"It has been a difficult period but we worked hard and played a lot of challenge matches.

"It is satisfying and we are delighted to be in the draw."

Grimley's side could hardly have had a better start against Wicklow who regularly struggle away from their Aughrim base.

Teams in second round

Longford referee Derek Fahy awarded a penalty when Clarke had his shirt pulled and the same player sent keeper Flynn the wrong way for the three-pointer.

Then, when an Aaron Kernan free dropped down in the full-back line, the Wicklow defence failed to clear and their fumbling was clinically punished by Clarke.

Wicklow did not score until Joey Kelly pointed in the 26th minute and a further score from corner-back Alan Burne quickly followed, but turned out to be their last score of the match.

London will play in their first Connacht Football Championship final after an exciting 2-11 to 1-13 win over Leitrim in Sunday's semi-final replay in Roscommon.

The Ruislip-based men will play Mayo in the provincial decider.