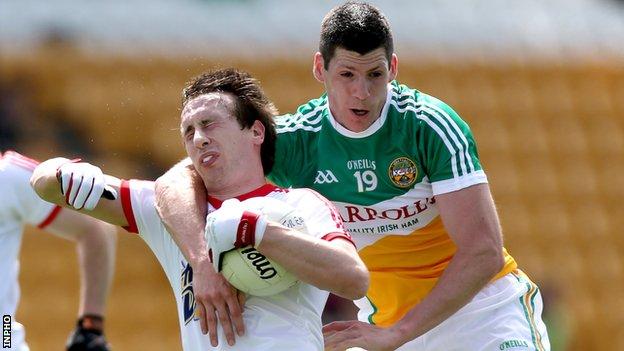 Tyrone romped to a 1-27 to 0-8 over Offaly in the opening round of the Football qualifiers at Tullamore as the gulf in class between Division 1 and 4 was there for all to see.

Sean Cavanagh hit six points as he starred in his midfield role.

The former All-Star formed an impressive midfield partnership with his brother Colm but in truth, Tyrone were completely dominant in all sectors of the field.

McCurry top-scored with 0-8 with goal-scorer O'Neill hitting his 1-2 in the second half.

With Tyrone aided by a first-half breeze, Cavanagh hit the opening point before two Mattie Donnelly scores plus McCurry and Conor McAliskey efforts left them five ahead by the 10th minute.

But Tyrone ruthlessly extended their advantage to 0-14 to 0-0 before Cunningham finally hit Offaly's first point in the 31st minute.

Cavanagh hit a further Tyrone point before the break and the Red Hands struck the opening five points of the second period.

Understandably, Tyrone did lose some of their drive in the second period with Offaly notching three unanswered points at one stage.

But O'Neill's goal extended Tyrone's lead to 20 at 1-23 to 0-6 as the Red Hands demonstrated there are likely to be a force late into this summer despite their Ulster quarter-final defeat by All-Ireland champions Donegal.

Tyrone's performance was all the more encouraging given the absence of injured experienced campaigners Stephen O'Neill, Joe McMahon and Justin McMahon.