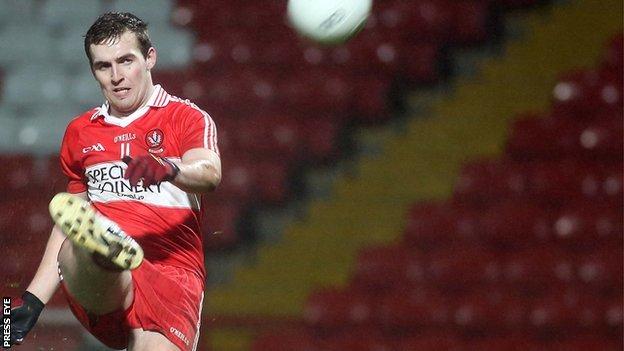 Ryan Bell and Lee Kennedy scored four points each at Owenbeg as Derry eased past Sligo in the first round of the All-Ireland qualifiers.

The Oak Leafers raced into a seven-point lead early on and their place in Monday's draw was never in doubt.

"Losing to Down in the Ulster Championship hurt us and we knew the things we had to work on," said Derry skipper Mark Lynch.

"We cannot take our foot off the pedal and must play for the full 70 minutes."

Derry scored the first seven points of the match at the Dungiven venue which was staging its first Championship fixture.

Teams in second round

Midfielder James Kilcullen added another and Sligo then had a great goal opening but Charlie Harrison's shot was straight at keeper Eoin McNicholl.

Two more points by Kennedy had Brian McIver's men 0-9 to 0-3 up at the interval.

Mark Breheny (3) and Adrian Marren (2) got Sligo's points in the second half while Kennedy, Bell (2), Lynn (2) and Eoin Bradley scored for Derry.

"They had a couple of goal chances and the scoreline does not show how hard it was for us," added skipper Lynch.

"We are full of belief and want to go as far as we can in the Championship."