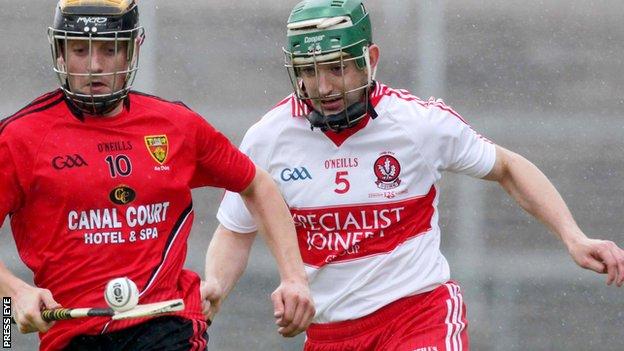 Derry and Down are to play their Ulster Hurling Championship semi-final replay on Sunday, 7 July at the Athletic Grounds (15:30 BST).

The counties drew at the Armagh venue on Sunday and, as a result, the final which had been scheduled for 7 July has to be rearranged.

Down were leading 1-16 to 0-18 but a late equalising free by Derry's Tiernan McCloskey forced the replay.

The winners will face Antrim in the provincial final.

After the first meeting, Down number two Paul Flynn had suggested the best option would be to set a new date for the final, rather than play the semi-final replay in midweek.

"We have played six Saturdays in a row in May and early June and the boys have had club matches too," he said.

"Antrim are out of the qualifiers so they are in no hurry and both sets of players could do with a decent break."

The replay will be preceded by the Ulster Minor final between Down and Antrim which throws in at 13:30 BST.