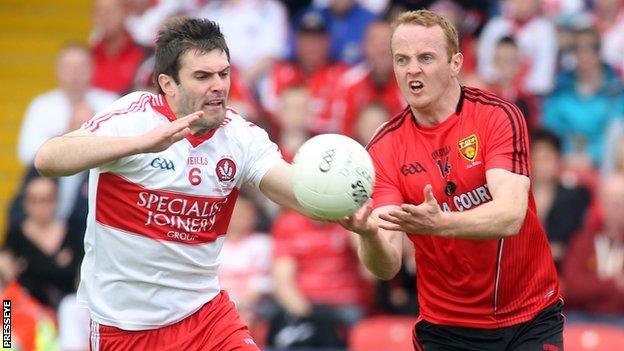 Derry have been drawn to face Ulster rivals Down and Cavan will face Fermanagh in the second round of the All-Ireland Football Qualifiers.

The Oak Leafers will be hoping to turn the tables on the Mournemen, who won the Ulster SFC quarter-final tie between the counties on 2 June.

Fermanagh will also be hoping to exact revenge for their defeat at the hands of Cavan in the Ulster SFC last eight.

Armagh will travel to Leitrim while Tyrone face an away trip to Roscommon.

In the other ties, Longford have been drawn against Wexford, Clare will take on Laois, Kildare face Louth and Galway play Waterford.

The games will be played over the next two weekends.

The games between Derry and Down, and Roscommon and Tyrone will be played on Saturday 6 July while Cavan against Fermanagh and Leitrim against Armagh will be staged on Saturday 13 July.

Armagh booked their place in the second round by trouncing Wicklow, Derry saw off Sligo, Tyrone outclassed Offaly and Fermanagh edged out Westmeath by a point.

Down and Cavan were in the draw by virtue of losing to Donegal and Monaghan in the Ulster semi-finals.