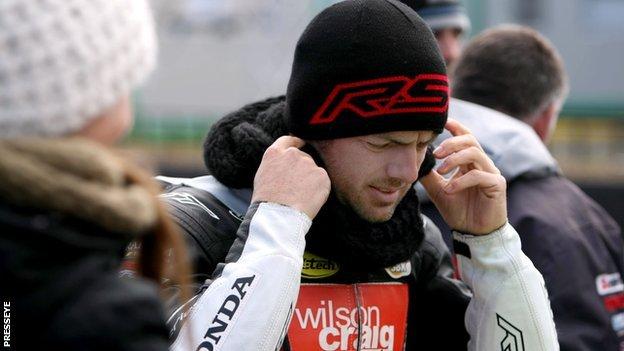 Australian Cameron Donald is to return to race at this year's Ulster Grand Prix after missing last year's event.

Donald was forced to sit out the 2012 Dundrod meeting as he was part of the Honda TT Legends World Endurance team which was competing at Oschersleben in Germany on the same weekend.

The Melbourne rider will ride for Wilson Craig Honda as he looks to add a first Grand Prix succees to his CV.

Meanwhile Scot Keith Amor is set to make a comeback to the race in 2014.

The Falkirk rider retired from the sport after suffering a serious shoulder injury, but looks likely to return next year.

"Keith had been planning to be at Dundrod this year but it's now on hold until next year," said clerk-of-the-course Noel Johnston.

"He has had some good wins there in the past and he'll be a welcome face in the paddock next summer," he added.

Among the notable newcomers for this year is Irish Superbike contender David Haire.

The younger of the Dunlop brothers will have the use of his Honda TT Legends Superbike for the 'big bike' races and will also contest the Supersport and Superstock classes, supported by his own sponsors under the banner of 'MD Racing'.

Bradford's Dean Harrison, the fastest ever newcomer at Dundrod, should be a podium contender on his Kawasakis, while Lincolnshire's Gary Johnson looks for his first win at the meeting after twice finishing second.

"Everyone will be trying to get that last big win of the season but I'm happy with my bikes and totally ready for it," said Johnson.

"I'm looking forward to it, the mass start is fantastic and the circuit is so smooth and flowing. It's a real rider's circuit," added the former Supersport TT winner.

Harrison lapped at over 130 miles per hour on his Superbike on his first appearance last year, and at more than 129mph on his way to finishing seventh in the Superstock class.

The event boasts a new title sponsor in the form of Metzeler this year, with practicing taking place on Wednesday 14 and Thursday 15 August, the Dundrod 150 races on Thursday and the main UGP raceday on Saturday 17 August.