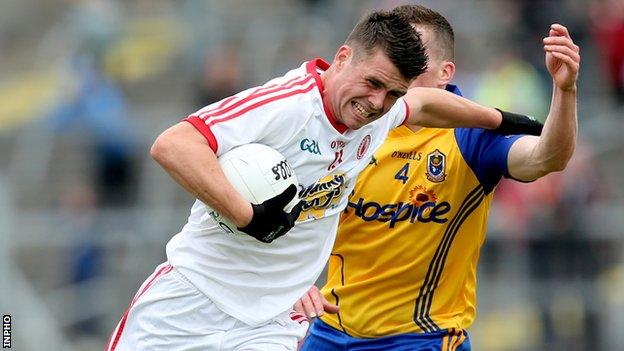 Tyrone had to withstand a nervy finish before edging a two-point win over a battling Roscommon in the Football Qualifier at Dr Hyde Park.

Conor Devanney's goal put Roscommon 1-2 to 0-2 ahead in a scrappy first half but Tyrone drew level by the break.

Four straight Darren McCurry points helped Tyrone move six ahead but Roscommon hit five of the next six points to leave only two in it.

Peter Harte made one particularly crucial block to beat away a dangerous Karol Mannion shot in injury-time while Cathal McCarron then made another vital intervention as Roscommon threw everything into attack in the final moments of the game.

A little more composure in front of goal earlier in the second half could have resulted in Roscommon earning a shock victory as they rued a number of bad wides.

Three Cathal Craig points and a Donie Shine effort had cut Tyrone's lead to 0-12 to 1-7 with over five minutes to play and Roscommon then preceded to hit four bad wides during the remainder of normal time.

After Tyrone's hammering of Offaly last weekend and Roscommon's poor display against Mayo in the Connacht Championship, many were predicting a facile success for the Red Hands.

However, Roscommon came out fired up as they appeared determined to physically compete with Mickey Harte's side.

Amid some tough early exchanges, the opening 15 minutes didn't produce a score before Devanney finally hit the target for the home side.

Sean Cavanagh replied for Tyrone from a free in the 18th minute before Mark Donnelly nudged the northerners ahead from play.

Roscommon corner-back Neil Collins created a goal-chance from himself as he stormed upfield but he was content to slot over a levelling point.

However, Roscommon did rattle the Red Hand net in the next score as Devanney blasted home soccer style after a bouncing ball had deceived two two defenders.

Crucially, Tyrone regrouped with three unanswered points before the break with McCurry, Mark Donnelly and Conor McAliskey on target.

Mickey Harte's half-time team talk appeared to have stirred Tyrone after the interval as the Red Hands finally found their fluency.

McCurry hit four straight points including a couple of fine efforts from play.

Martin Penrose and Cavanagh added further unanswered scores as Tyrone appeared set to pull away to a decisive victory.

But to their credit, Roscommon refused to throw in the towel and with Tyrone looking anxiously towards the finishing line, the home side hit five of the final six scores.

One of those scores could have even been a goal with Cathal Craig, perhaps wrongly, content to take his point to cut Tyrone's advantage to 0-12 to 1-6.

Another Craig free left only two in it with five minutes of normal time left but as a major shock loomed, Roscommon lost their composure in the closing moments of the contest as the otherwise excellent Craig and Kevin Higgins were among those guilty in a sequence of four wides.

Roscommon were still coming at the Red Hands in waves in injury-time and Tyrone were grateful for Harte's brave block to deny Mannion and a further McCarron interception.