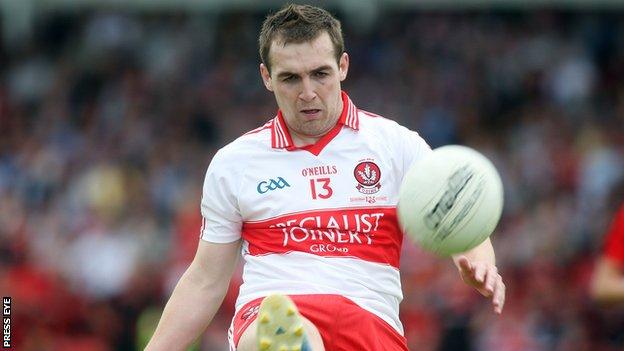 Derry avenged their Ulster defeat by Down as they ended the Mourne County's Championship hopes by deservedly winning Saturday's qualifier.

However, Derry dominated the second half as Down finished with 13 men with Brendan McArdle and Kevin McKernan receiving straight red cards.

Bell produced an outstanding display with his haul including a couple of superb scores from play.

But in truth, the foundations for Derry's win were laid by a tremendous defensive display.

For much of the contest, Down competed reasonably in midfield but the Mourne forwards were unable to evade the shackles of a strong and disciplined Derry defence.

Patsy Bradley and PJ McCloskey also had impressive games in the middle third of the field for the Oak Leafers as they got through a power of work in defence and attack.

Benny Coulter was not deemed fit enough to start for the Mourne County but Down still made the better start as O'Hare kicked the opening two points of the game.

However, Bell opened Derry's account with a superb long-range point in the 11th minute and almost immediately, Eoin Bradley levelled the contest with another fine score from play.

Ambrose Rogers hit Down's first score in over 20 minutes in the 27th minute but Derry were four ahead in the 31st minute after two more superb points from play with Lee Kennedy and Bell on target.

Down were looking in a degree of trouble at that stage but the contest appeared to turn in their favour in first-half injury-time as McKernan set up O'Hare for a goal, which was immediately followed by another O'Hare point.

But to their credit, Derry regrouped immediately after the break to regain control.

Bradley squandered a great goal chance immediately after the break as his weak point-blank shot was saved by Brendan McVeigh.

But crucially, the superb Bell knocked over the resultant 45 which was quickly followed by another Bradley point from play.

With Derry starting to win the majority of the 50/50 balls, James McCartan tried to rally his side by sending on Coulter with 20 minutes left.

Substitute Emmett McGuckin extended Derry's lead to three in the 52nd minute and Down wasted two great chances to reduce the margin as Keith Quinn and McKernan both fired bad wides.

Things got even worse for Down in the 58th minute as they were awarded a free on the Derry 21 metre line only for McArdle to retaliate to Chrissy McKaigue's initial foul which resulted in his straight red card.

Derry duly outscored Down by 0-3 to 0-1 in the final 12 minutes of play and the Mourne County's dismal day ended with McKernan's red card.