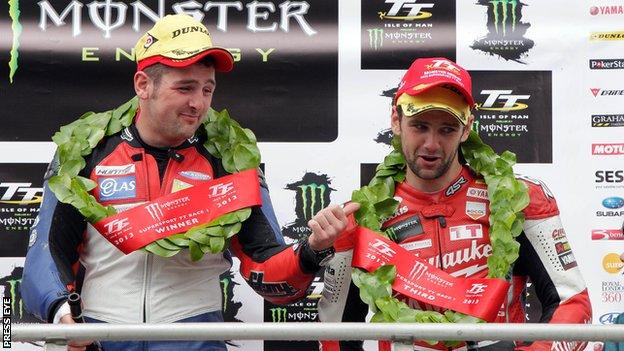 Michael set a new lap record in winning the Grand Final and the 24-year-old also took victory in the Open event, with Derek Sheils second in both races.

William edged out his younger brother by 0.5 seconds in the 600cc class and enjoyed success in the 250cc event, with Davy Morgan the runner-up.

Jamie Hamilton led the Supertwins from start to finish but was pushed all the way by Michael Sweeney, with Andy Farrell and William Davison next to cross the line.

The race was red-flagged when Shaun Anderson crashed without serious injury.

Pole position man Sheils led for four laps of the Grand Final, but was overhauled by Michael, who enjoyed a 2.5-second advantage at the finish.

Davy Morgan, William Dunlop, Jamie Hamilton and Derek McGee made up the top six leaderboard in the feature event.

William was last away from the grid in the 250cc event, but recovered from his bad start to lie third at the end of lap one and lead on lap four.

Sweeney was third, behind Morgan.

Michael Dunlop set the pace for the first three laps of the 600cc, but Yamaha-mounted William hit the front on the fourth circuit and held on to win by 0.5 seconds, with McGee third.

William Dunlop led at the end of the opening lap in the 125cc race but pulled into the paddock after crossing the line, leaving Elliott to take a comfortable win ahead of Bruce Moulds, Nigel Moore, Sam Dunlop and Dan Sayle.

The Dunlop brothers now travel to the Isle of Man to take part in the Southern 100 road races.