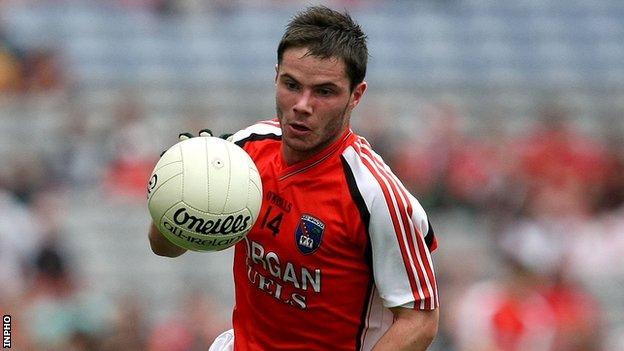 Eugene McVerry netted a hat-trick as Armagh scored eight goals in a one-sided win over Leitrim in the second round of the All-Ireland qualifiers.

McVerry scored two with one each from Tony Kernan and Kevin Dyas as Armagh stormed to a 4-8 to 0-4 interval lead.

Corner-forward McVerry and Mark Shields netted early in the second half before star forward Jamie Clarke scored two goals for the Orchard county.

The last team to score eight goals in a Championship fixture was Galway against London in 2004.

Despite being against a Division Four outfit, this latest win will further boost Armagh's confidence.

They had come under fire from the critics after losing to Cavan in the Ulster Championship preliminary round but Paul Grimley's men then regrouped to secure a big win over Wicklow in the opening qualifier round.

Saturday's match at Carrick-on-Shannon lacked a competitive edge from the start as Tony Kernan and Clarke chalked up early points.

Then came the first goal as Dyas found McVerry who fired in on nine minutes.

Tony Kernan landed a free and then got the second goal after build-up work by Clarke.

The third goal came when Leitrim lost possession in midfield and room opened up for Dyas to go through.

At that stage it was 3-4 to 0-2, and the lead was extended by an Aaron Kernan free and Clarke point before McVerry got his second goal.

Mullaghbawn club player McVerry turned to shoot low into the net for his hat-trick goal in the second half and then Whitecross defender Shields found the net as well.

It seemed odd that the talented Clarke had not got any of Armagh's six goals, but he got in on the act with the last two goals against a totally deflated Leitrim.

Aaron Kernan's free right on the final whistle meant a remarkable winning margin of 27 points for the Ulster county.

"That's not a true reflection of Leitrim - they are a better team than they showed against us," said Orchard boss Paul Grimley.

"You're always on your guard when the level of expectation is with you but that won't be a problem in the next round, as the teams in the draw are a considerable step up.

"These boys have shown in the last two games that they can play football, that they can adjust and the camaraderie between them is like a club team."