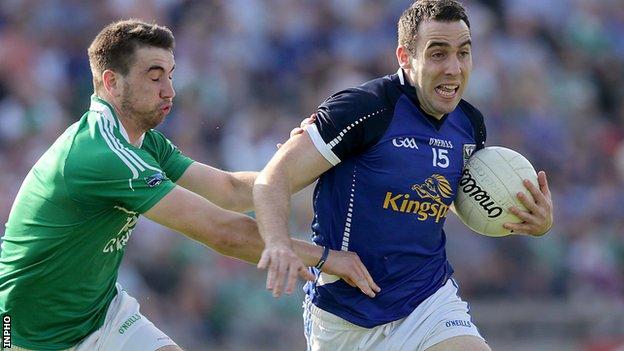 Three players were sent-off as Cavan earned a comfortable win over Fermanagh in an ill-tempered All-Ireland second round qualifier at Breffni Park.

Cavan dominated the first half and Martin Dunne's goal helped the hosts to a 1-7 to 0-5 lead at the break.

A meele broke out as the players walked off at half-time, which led to the dismissal of Erne forward Sean Quigley.

Cavan's Martin Reilly and Fermanagh's Shane McCabe were red-carded in the second half as Cavan eased to victory.

It completes a championship double for Cavan over their derby rivals after last month's win in the Ulster SFC.

Cavan scored the opening three points through Eugene Keating, Fergal Flanagan and Damien O'Reilly and they remained on top for the opening 35 minutes.

Quigley kept Fermanagh in touch with four points in the first half and his loss was a major blow to the visitors, who were guilty of poor discipline in the game.

Tempers frayed after the half-time whistle blew and there was fighting as the players left the pitch.

Referee Martin Duffy waited until the teams walked out for the second before handing out punishment.

Quigley was shown a straight red for punching while Cavan assistant manager Anthony Forde was sent to the stands.

Cavan were 1-10 to 0-6 ahead when Reilly was sent-off for two yellows and he was quickly followed by McShane, who also picked up two bookings.

The match fizzled out as a contest as Cavan strolled to victory and they go into Monday's draw for the third and fourth qualifying rounds.

"The match did turn into a battle but we stayed disciplined and got through," said Cavan boss Terry Hyland.

"Our boys push out hard and tackle hard - we've worked on that and it has paid dividends.

"Give us a little bit of time. We're a long way from being the finished article."