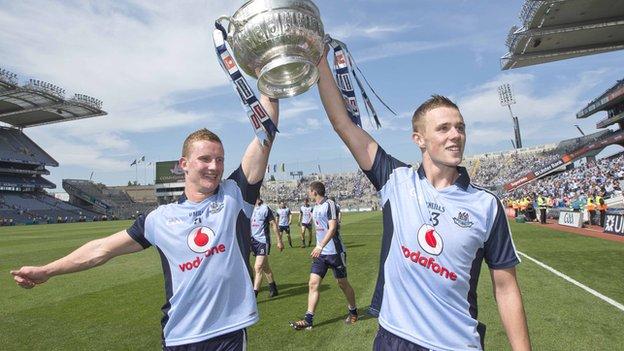 Dublin earned a comfortable win over Meath in the Leinster SFC final thanks to an impressive second-half display at Croke Park on Sunday.

Paul Ryan's goal helped the holders into an early lead but Meath hit back and Mickey Newman fired over five points for the Royals.

Meath led 0-9 to 1-4 at the break but Dublin dominated the second half with a helping breeze.

Paul Mannion added a second goal as the Dubs eased to a 52nd Leinster title.

Ciaran Kilkenny starred for Dublin in attack and he started the move for the opening goal after five minutes, with Ryan hitting the roof of the net.

Newman and Eamon Wallace, who slotted over two points, threatened an upset and left Meath two ahead at half-time.

Kilkenny scored three points on the restart as Dublin moved in front, only for Meath to draw level at 1-9 to 0-12.

The Dubs took control and they were three clear when Mannion netted from a rebound with a minute left.