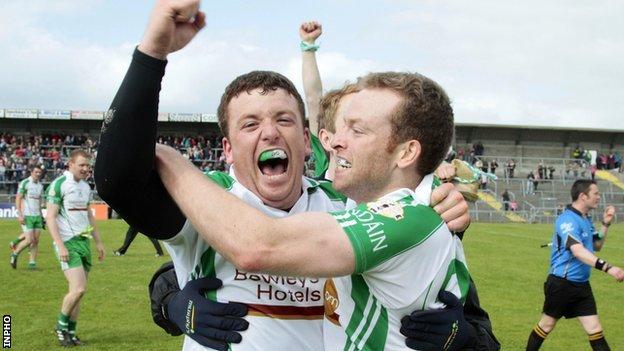 In a corner of Ruislip, west London, there is a field that is forever Ireland.

This Sunday, London's Gaelic football team play the biggest match in their history when they contest the Connacht Senior Football final.

If they win the match, their next game could be at the 82,300-capacity Croke Park in Dublin in the All-Ireland quarter-finals.

"It's hard to explain and put into perspective. It's a dream," Noel O'Sullivan, the chairman of the London County Board, told BBC London 94.9.

"I've been involved for over 40 years and we always aspired to win one game in Connacht.

"To reach the final has been unbelievable."

The London GAA (Gaelic Athletic Association) was formed in 1896 to give the Irish community in England's capital an opportunity to play Gaelic football and hurling and has formed the focal point for what is now a thriving youth and club system.

Their formative years were successful, with the side winning the All-Ireland Senior Hurling Championship in 1901, but prior to this year they had only won one senior game of Gaelic football.

Since the 1970s the club have competed in the Connacht Senior Football Championship, one of four similar competitions in the provinces of Leinster, Ulster and Munster, which culminate in the All-Ireland Championship.

Such is the size and spread of the Irish diaspora that a team from New York in the United States also compete in the Connacht SFC.

London's recent success has been down to an increasingly professional approach, retaining the core of last year's side and attracting players from Ireland who are looking for work during the recession.

Their current team features players from Cavan, Derry, Galway, Longford and Sligo as well as a London-born player in Phillip Butler, who was introduced to the game by a friend from school.

"It has created a buzz around London, and Ireland.

"It is a game-changer and has put London on the map. It will make people in Croke Park realise we were here."

Having beaten Sligo and Leitrim, the latter via a replay, London face last year's All-Ireland final runners-up Mayo in the Connacht final in Castlebar this weekend.

"The lads are all willing to be the best they can be.

"It's down to the last 12 and it's knockout football. We're hoping for a huge performance."

Gaelic football is one of the biggest sports in Ireland: a 15-a-aside field game which is played on a pitch up to 145m long and 90m wide.

The goalposts are the same shape as on a rugby pitch, with a lower crossbar, and a goal tended by a keeper.

The ball can be carried in the hand for a distance of four steps and can be kicked or "hand-passed". After every four steps the ball must be either bounced or "solo-ed" (an action of dropping the ball onto the foot and kicking it back into the hand). Players may not bounce the ball twice in a row.

London beat Leitrim by a one point margin last month - an experience Coggins believes will prove useful in the Connacht final.

"Belief is a powerful ally. We had two games against Leitrim which were fierce and competitive.

"Playing close games and getting over the line against good, competitive teams who have a great tradition in Connacht gives belief and determination."

The run has caught the imagination of the Irish population in London, including good luck messages from Mayor of London Boris Johnson and London-based comedian Dara O'Briain, as well as in Ireland itself.

Even should they lose to Mayo, London will have another chance to reach the quarter-finals of the All-Ireland Championships.

The losers of this weekend's match at Castlebar will play the winners of Derry and Cavan for a place in the last eight.

Having written London GAA history in 2013, Coggins and O'Sullivan agree the potential is there for London to have an even better team in the future.

"We have to build on it and get more people playing Gaelic football and hurling in the capital and get it into more schools," Coggins said.

"It is a great game and am so happy I learned to play."

O'Sullivan added: "It's been a fantastic achievement by the team.

"For years you'd see kids wearing the jerseys of the teams from counties in Ireland. It is joyful to see kids in London wearing the London shirt.

"With proper management, training and funding, there's no reason we can't be there or thereabouts in the future."