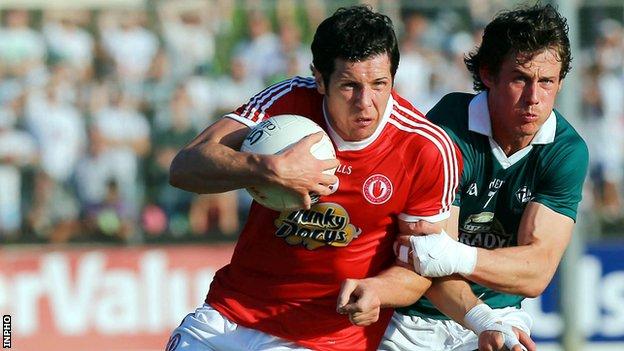 Tyrone set up a clash with Meath next Saturday as they edged out Kildare in a tense All-Ireland Football qualifier.

However, Kildare hit five straight points to level and the omens looked good for them as Shane Connolly saved a Stephen O'Neill penalty.

Kildare's defeat could herald the departure of manager Kieran McGeeney after six years in charge.

The Lilywhites' old failure of poor shooting came back to haunt them in the first half of Saturday's clash at a sweltering Newbridge.

Kildare matched Tyrone in possession terms for much of the opening period but the Red Hands were much more accurate in front of goal.

Making his return to action after injury, Stephen O'Neill did not manage a score in the 70 minutes but he was a handful throughout the contest for the Kildare defence and manager Mickey Harte will have been delighted to see the Red Hands talisman getting in 70 minutes of action.

Johnny Doyle kicked the home team ahead after only 30 seconds but Tyrone responded with three unanswered scores with Darren McCurry and Sean Cavanagh (two) on target.

Niall Kelly turned down a goal chance in favour of kicking a Kildare point in the ninth minute but Tyrone were in a degree of control within a minute as a charging Donnelly rattled the net after a perfectly weighted pass from McCurry.

With Kildare continuing to waste chances, Tyrone were able to move into a six-point lead before Doyle notched the final score of the opening period.

Kildare summoned up a big effort after the restart which yielded five straight points as they got on terms with the Red Hands.

Doyle started the scoring burst with a free with Padraig O'Neill, Niall Kelly, Doyle and Paul Cribben notching the other scores.

The sense that the impetus was with Kildare increased when Connolly spread himself to save O'Neill's penalty in the 47th minute after Mattie Donnelly had been hauled down in the square as he was about to fire towards goal.

But crucially, Tyrone hit the next score as McCurry edged them ahead again with a 50th minute free.

The very effort of getting on terms seemed to have left the Lilywhites with little in the tank and Tyrone's forwards began to find open spaces as Mark Donnelly, Sean Cavanagh, Martin Penrose and Peter Harte slotted unanswered points.

McGeeney's decision to haul off the apparently uninjured Padraig O'Neill from midfield looked a questionable decision as Cassidy dominated the crucial sector in the closing 15 minutes.

Peter Kelly's 63rd-minute dismissal, after a harsh second yellow card, was probably the final nail in the Kildare coffin but the game had probably already slipped away from them by that stage.

Mark Donnelly wasted a goal chance to kill off the home team two minutes later but Tyrone had done enough despite late points from Eoghan O'Flaherty and Seanie Johnston.