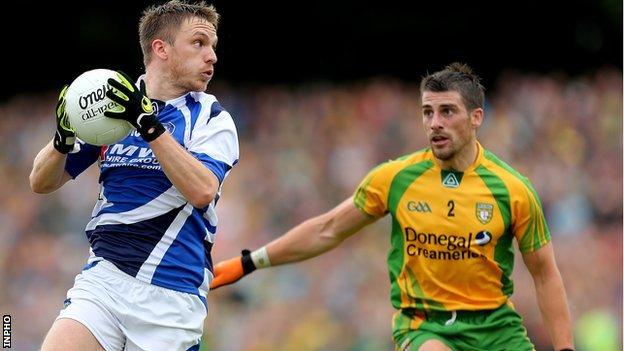 All-Ireland champions Donegal are through to the quarter-finals of the 2013 Championship thanks to Saturday's win over Laois at Carrick-on-Shannon.

Having surrendered their Ulster title to Monaghan six days earlier, Donegal did enough to stay in the race for the coveted Sam Maguire trophy.

Their forward Colm McFadden was the game's top scorer with six points.

Donegal were 0-5 to 0-1 up after a low-key first half but came under pressure as Laois fought back after the break.

At one stage Laois, thanks largely to top scorer Ross Munnelly, had cut the deficit to two points but late scores by McFadden, Patrick McBrearty, defender Neil McGee and substitute Leo McLoone saw Donegal safely through.

Manager Jim McGuinness will be relieved to get into the hat for the quarter-finals, with this game coming so soon after their surprise defeat in the provincial final.

Munnelly put Laois into the lead but it was to be their only point of the half as two McFadden frees and points by David Walsh, Michael Murphy and McBrearty put Donegal four up by the interval.

McFadden added two more frees and two from play in the second half with McBrearty also on target.

It looked like it could be a nervy finish for Donegal, but they finished with a flourish, scoring four without reply.