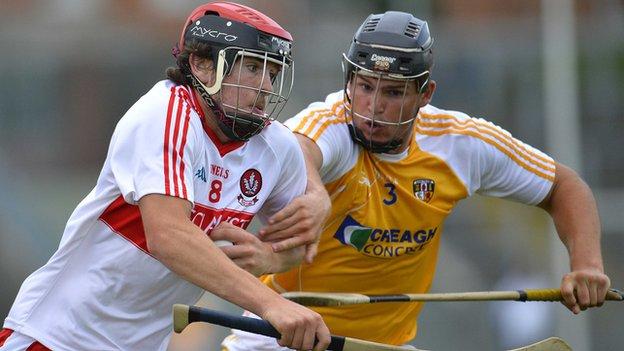 Antrim secured their fifth successive Ulster Under-21 Hurling Championship by hammering Derry by 6-22 to 0-6 in Wednesday's final at Casement Park.

Antrim, who had beaten Down to reach the decider, now play Leinster champions Wexford in the All-Ireland semi-finals on 24 August.

Ciaran Clarke got two goals with Daniel McKernan netting the final one.

While Kevin Ryan's charges were in cruise control for large periods of this game, they struggled for scores in the first quarter, and Derry were on level terms three times in the opening 16 minutes.

Daniel McKernan and captain Jackson McGreevy were on target for Antrim early on, with Dominic Mullen, Niall Ferris and Tiernan McCloskey keeping Derry in touch.

Antrim took the lead in the 17th minute following a point by Ballycastle clubman McAfee, and they did not trail again.

The hosts scored 3-8 without reply in a 13-minute spell before the break, with McAfee and Ciaran Clarke (2) getting goals.

Derry got the first score of the second half with McCloskey pointing a 65, but the Oak Leafers could not gain a foothold.

Goalkeeper Ciaran O'Kane, who had a busy evening, was hugely instrumental in keeping Derry from further embarrassment, pulling off a string of fine saves in the second half.

However, Antrim were hugely hungry for scores, with McAfee bagging two goals in the closing 30 minutes, along with McKernan who took his tally to 1-7 by the close of play.

Antrim's brilliance in this match was undermined by the fact that all bar two of their points came from open play.