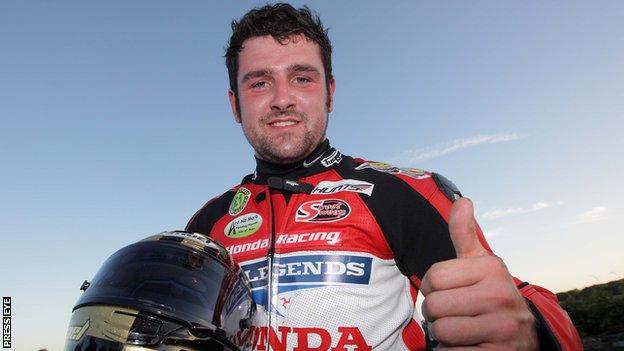 Michael Dunlop has been confirmed as a starter for the Armoy road races, where he will come up against brother William, Guy Martin and Conor Cummins.

Dunlop will take in his local event after John McGuinness, Simon Andrews and Michael Rutter were named in the Honda TT Legends team to take part in the Suzuka 8-Hour World Endurance race.

Jonathan Rea will hope to repeat his triumph in the Japan race last year.

Meanwhile the Armoy event will take in a 10-race programme on Saturday.

The main focus will be on the feature Race of Legends event, along with the Open and Supersport races, as Michael Dunlop aims to repeat the treble he achieved 12 months ago.

CD Racing's Derek Sheils should be a leading contender, along with Michael Pearson and KMR Kawasaki's Jamie Hamilton.

Practice is scheduled for Friday from 14:30 BST, with roads closing on Saturday at 10:00 for racing.

Meanwhile at Suzuka, Rea will again ride a special Honda Fireblade in the FCC TSR colours after last year becoming the first British rider to triumph at the iconic race for 33 years.