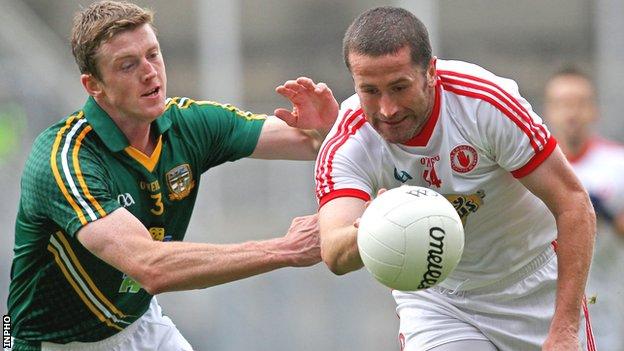 Eamonn Wallace's goal gave Meath an early lead before Cavanagh slotted over five points to help Tyrone to a 0-11 to 1-4 advantage at the break.

Meath fought back and moved ahead after Mickey Newman's penalty only for Tyrone to regain control and Cavanagh's eighth point sealed victory.

The Red Hands will take on Ulster champions Monaghan in next weekend's All-Ireland quarter-finals.

Wallace sprinted through before firing into the bottom corner for the first score of the game after seven minutes.

Meath were two in front when the Red Hands hit back with five unanswered points, first from Darren McCurry and then Cavanagh kicked over four in a row.

Newman pointed to halt Tyrone's charge but Cavanagh quickly added his fifth of the half.

Stephen Bray's excellent point from wide brought Meath two behind only for Mattie Donnelly and McCurry to ensure the Ulster side went in four ahead at half-time.

Newman and Cavanagh exchanged points before the Royals forward found the top corner from the penalty spot on 40 minutes after Conor Gormley's foul on Seamus Kenny.

The impressive Wallace then rattled over two points and suddenly Meath were a point clear.

Wallace and Newman pointed to leave Meath just a point back but Cavanagh had the final say with another fine free in the final minute.

The only blemish for Mickey Harte's team was O'Neill's dismissal in added time.