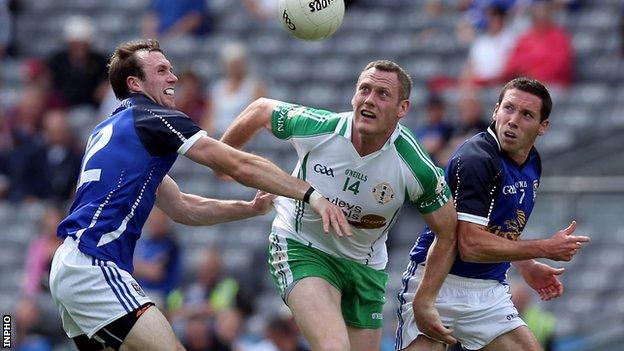 Cavan finished strongly to beat London by nine points at Croke Park to clinch a place in the All-Ireland Football Championship quarter-finals.

Underdogs London, beaten finalists in the Connacht Championship, were level at half-time having scored a 19th-minute goal through Paul Geraghty.

But the Exiles managed just two points in the second half and Cavan pulled away to secure their expected victory.

It ended a memorable and historic Championship campaign for London.

The Ruislip-based club had won just one Championship match in their history before narrow 2013 victories over Sligo and Leitrim.

They were expected to fall short against Cavan and, in the end, they did run out of steam.

London did get the first point through Mayobridge native Cathal Magee, but then Terry Hyland's Cavan rattled off six points through Martin Dunne (4), Fergal Flanagan and Martin Reilly.

Lorcan Mulvey of London then pointed against his native county before Geraghty's goal.

Dunne added a free and Mossy Corr got two from play for Cavan while Ciaran McCallion landed a couple of good scores for London before team-mate Mulvey levelled the contest 1-6 to 0-9 with a free just before half-time.

Cian Mackey and Eugene got their first points to settle Cavan, with Mulvey landing another free for the Exiles.

Flanagan and David Givney then boosted Cavan who looked as if they were at last getting on top.

Caolan Doyle scored from play but that was London's last score as Cavan ran away with it.

Keating should have scored a goal for Cavan but somehow hit a post with a gaping net in front of him.

It did not really matter as Cavan made sure of progress by scoring four unanswered points through Dunne, Givney (2) Keating before Niall McDermott got their goal.